The attorney for a Russian firm indicted by special counsel Robert Mueller for meddling in the 2016 election accused Mueller of “selective prosecution,” saying the ex-British spy who authored the bogus Trump “dossier” should face the same charges.

Washington, D.C. attorney Eric Dubelier, who represents Concord Management and Consulting LLC, asked Mueller’s team in court why Concord is charged with election interference, but Christopher Steele is not. 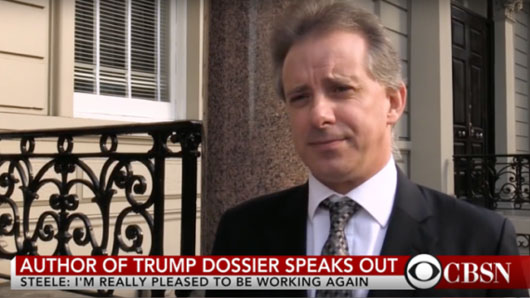 Mueller’s team responded by saying Steele’s actions were not on a par with elaborate Russian social media trolling and computer hacking. But his court argument didn’t explicitly say Steele is innocent of interference.

U.S. District Judge Dabney L. Friedrich rejected the Concord argument. She upheld the Mueller indictment in a ruling last week, saying it is indeed a crime for foreigners – in this case troll farming Concord – to meddle in U.S. elections.

“In theory, everything Mueller is investigating the Russians for could be applied to the whole Fusion GPS/Clinton campaign/DNC operation,” said Tom Fitton, president of Judicial Watch.

“The dossier was intended to impact the election. That is why Clinton operatives, Fusion GPS and Steele leaked info about it before the election,” Fitton said. “And, ironically, as Steele supposedly used Russia intel sources for the dossier, it arguably is another way in which the Russians sought to interfere with our elections.”

“Steele allegedly used the media to influence the 2016 election while concealing his identity and foreign nationality,” Dubelier said in an Oct. 5 filing. “Moreover, Steele’s ultimate goal was to publicly leak the information while remaining anonymous, which is far more egregious than private Russian individuals posting opinions on social media.”

“None of Concord’s examples remotely compares to this systematic, deceptive effort to interfere in our democracy,” the Mueller brief said.

Scarborough noted that “Not addressed by Mueller is whether Steele was in fact a foreign agent who influenced the U.S. political system.”

The Foreign Agent Registration Act (FARA) requires people working on behalf of foreigners to register with the Justice Department or face criminal liability. A check of the FARA database does not show Steele or his company.

Dubelier argues that far from being a minor involvement, Steele’s dossier had far-reaching effects.

“Steele was working on-and-off as a confidential human source for the FBI, and interacted with other U.S. federal officials – including officials from the DOJ, FBI, State Department, Central Intelligence Agency, and staff of members of Congress – in an effort to disseminate his unverified dossier of allegations against Trump, Russian officials, and others.”

Scarborough noted that some observers say Steele “not only influenced the 2016 election but also infected the entire political system with unsubstantiated felony charges against Trump people that remain publicly unverified today.”