A few weeks ago, we got word that the Baseball Hall of Fame would not be inducting any new members for 2021, and that included Curt Schilling whose outstanding performance as a fast-ball king is undeniable. But for his born-again Christian and conservative views, he would have been enshrined in the world famous Hall in Cooperstown, New York, years ago.

There are 308 members of the BBWAA (Baseball Writers Association of America) and balloting goes on annually in consideration of inducting new members. For approval to the Hall of Fame, a successful applicant needs to garner a “Yes” vote from a minimum of 75 per cent of the voting baseball reporters. And any one candidate for membership in the Hall of Fame has 10 years in which to overcome that hurdle. 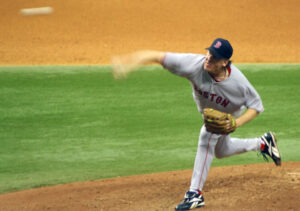 Schilling, 54, polled 71.2 per cent of the baseball writers in the last poll targeting inductees for 2021. Twenty five ex ball players were considered as candidates for induction, but none received the necessary number of yes votes. Schilling came the closest with his 71.1 per cent. Nearest him in the negative count were Home Run King Barry Bonds with 61.8% and fast baller, Roger, the Rocket, Clemens with 61.6.

It was the ninth consecutive year of rejections for Schilling, Bonds and Clemens. Apparently, it is a “character” issue for the three, because their performance on the diamond was truly extraordinary. Bonds and Clemens allegedly used steroids to enhance their performance, and Schilling is just too outspoken and conservative to be in the Hall. In past years following his retirement from the diamond, Schilling has been a vociferous supporter of Donald Trump; and a critic of the transgender movement; and of Muslims who want to turn the planet into a caliphate calling for death for infidels.

Barry Bonds has said that he juiced up on steroids but unwittingly, and Clemens has denied ever using illegal drugs during his brilliant career, but no one believes him. That’s the case even though he always tested drug free. Clemens’ enshrinement has been torpedoed by other players who claim he received steroid injections.

But without question, Curt Schilling belongs in the Hall of Fame. His so-called character transgressions and disdain for “political correctness” did him in. He likes the policies of President Trump and agrees with him that journalists lie and that “fake news” is prevalent. His so called biases really pale in comparison to the records of Hall of Famers like Ty Cobb and Tris Speaker, both reputed members of the KKK; and Babe Ruth, a notorious drinker and womanizer. But these are different times where all Caucasians are white supremacists, homophobes and xenophobes, and Schilling has been given that jacket.

Back in 2015 when Schilling was broadcasting for ESPN. he castigated Muslim terrorists for having slaughtered Americans in San Bernardino, California. Something needs to be done to reign them in, and he noted that appeasing experts tell us that the extremists in Islam make up a “mere” 5 per cent, he said. There are 1.5 billion Muslims in the world. and 5 per cent equates to 75 million persons. Nazi Germany in the 1930s had 65 million residents and a mere 7.5 percent identified as Hitler followers. “So, how did that go?” he asked.

As to transgenders and the Obama decree about bathroom use, Schilling took exception. Using the social media, Schilling tweeted that the men’s bathroom was designed for individuals with a penis. To say otherwise is “pathetic” but unfortunately, if you object to the policy, you are nothing but “a narrow minded, judgmental unloving, racist bigot…” The liberal ESPN promptly fired him as a sports commentator.

During 19 years in the big leagues, Schilling was a standout right-handed fast baller with Baltimore Orioles, Houston Astros, Philadelphia Phillis, Arizona Diamondbacks and the Boston Red Sox. His longest stints with a team were 8 years with the Phillies and four with the Boston Red Sox.

In those years he won 216 games, and had an ERA of 3.46. He struck out more than 3,000 batters and his 11 wins, and 2 loses in post season games is the best post season pitching record among pitchers with at least 10 decisions. He will forever be remembered for winning Game 6 of the 2004 American League Championship Series for the Red Sox with surgically repaired tendons and blood dripping down his sock. “Baseball has rarely seen a big-game pitcher like Schilling….he was always at his best when pressure burned the hottest,” one baseball writer has noted.

Learning of his rejection from the Hall for the ninth time, Schilling requested the BBWAA to withdraw his name from further consideration in 2022 which would be his 10th and final year for possible enshrinement. His request however would not necessarily restrict the baseball writers from this consideration and many sports figures, such as Bob Costas, have vigorously supported Schilling’s election to the Hall of Fame.

Schilling, a devoted family man with three children, said in his letter to the BBWAA that he knows trends and “I know that I will not attain the 75% threshold for induction.”

In my years as a ballplayer, he wrote that he has been a good teammate, and has been exposed to adulterers, assaulters, drug addicts and alcoholics. I have never hit a woman, driven drunk, done drugs or otherwise assaulted anyone or committed any sort of crime. I am at peace…and will always have one thing they will forever chase. A legacy. Whatever mine is as a player, it will be the truth and one I earned for better or worse.”

‘The game has made it clear it does not want me back and that’s fine— the game owes me exactly nothing,” he said. “It gave a billion more than it took and I’ll forever be deeply in debt debt to it.

“My love of this country has always been worn on my sleeve and my desire to do the right thing and be a good person has driven my life choices.”

Currently, Schilling is a commentator for Blaze TV.