Crestfallen Clinton pal McAuliffe had all the right talking points; What went wrong? 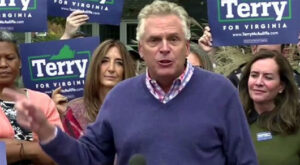 Terry McAuliffe [an intimate of Bill and Hillary Clinton] said he’s completely confused that telling parents the state owns their children, that parents have no say over what their kids learn in school, and that repulsively disgusting pornographic books are good for kids didn’t prove to be electorally popular.

“It’s so weird,” a crestfallen McAuliffe told reporters. “We pulled out all the stops: we told parents that we own their children’s minds, that they’re wards of the state,  . . . and it just didn’t seem to connect with the people for some reason.”

McAuliffe also performed a somber rendition of the San Francisco Gay Men’s Chorus classic song “We’re Coming for Your Children” at his defeat party. “I know we’ve suffered a loss here, but rest assured,” he said. “We are coming for your children sooner or later. This idea’s time will come sooner or later. Hopefully sooner.”

Crestfallen Clinton pal McAuliffe had all the right talking points; What went wrong?

Crestfallen Clinton pal McAuliffe had all the right talking points; What went wrong? added by Editor One on November 3, 2021
View all posts by Editor One →