A U.S. District judge ordered the reopening of gun stores in Massachusetts effective at noon on Saturday, May 9. 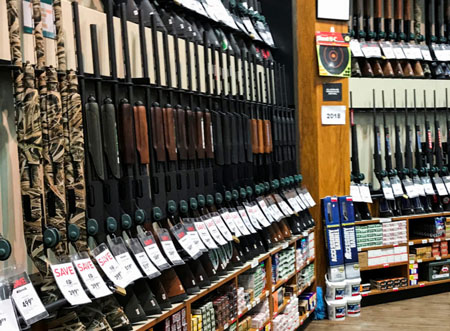 On April 3, Breitbart News reported that Baker was keeping gun stores closed despite the Trump administration’s guidelines to the contrary.

Alan Gottlieb, founder and executive vice president of the Second Amendment Foundation, commented on Woodlock’s ruling, saying, “We are delighted at the decision by U.S. District Judge Douglas P. Woodlock and the swiftness with which it was reached. Constitutional rights are never put on hold because of an emergency, including the outbreak of a virus. Too many elected officials think otherwise, and we’re having to deal with them one lawsuit a time, same as we’re taking on Governor Baker.”

Judge Woodlock ruled: “There’s no justification here between the goals of the emergency declared by the Commonwealth and the burdening of the constitutional rights of the defendants in this narrow area.”

The Department of Homeland Security (DHS) released guidelines on March 28, which listed as essential “workers supporting the operation of firearm or ammunition product manufacturers, retailers, importers, distributors, and shooting ranges.”

“It wouldn’t have been my definition but that is the definition at the federal level, and I didn’t get a vote on that,” Murphy said.

Murphy had faced multiple lawsuits from gun groups after his initial order.

Pennsylvania Gov. Tom Wolf allowed gun shops to reopen on a limited basis during the coronavirus pandemic after several justices of the Pennsylvania Supreme Court urged him to do so.

Firearm and ammo-related businesses were added to the Cybersecurity and Infrastructure Security Agency (CISA) list of “critical infrastructure” on March 28, shortly after officials and civil rights groups from states across the nation fought to have gun stores deemed essential, and ultimately came out on top.

New York did not change its executive order to reflect CISA’s new guidelines. The NRA filed a lawsuit against New York officials, including Gov. Andrew Cuomo, for declaring gun stores in the state “non-essential”

“The right to keep and bear arms is enshrined in the Constitution, in part, to give Americans the ability to defend themselves and their families,” said William A. Brewer III, counsel for the NRA, in a statement. “The current public health emergency does not justify the complete elimination of this right, especially during a time when many New Yorkers have valid concerns.”

Firearms sales and federal background checks for purchases soared to all-time highs in March. The FBI conducted 3.7 million background checks in March, the highest total since the national instant check system for buyers was launched in 1998 and 1.1 million higher than the number conducted in March 2019.