Las Vegas police are still investigating and could charge “additional suspects” in the Oct. 1 attack that claimed 58 lives, a Las Vegas police department lawyer said during a court hearing on Jan. 16.

“Without naming names, there are potential charges against other people, because of the ongoing investigation?” District Court Judge Elissa Cadish asked Metro Police lawyer Nick Crosby, according to a report by Las Vegas news outlet Metro 5. 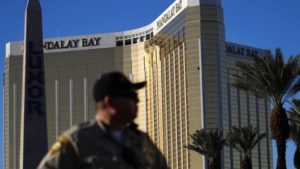 “Yes there are charges being investigated,” Crosby replied, adding that charges could be filed within 60 days.

Crosby did not identify the nature of the charges or who might be charged. He told the judge he had no information that the charges were related to the “actual murders.”

The Jan. 16 hearing saw lawyers for Metro Police square off with lawyers representing multiple media outlets over the unsealing of search warrants and evidence seized in the attack by gunman Stephen Paddock.

“Are they investigating obstruction of justice? Lies to Metro under oath from Mandalay Bay employees? Is it people who sold [Paddock] the guns or ammunition? Or did someone have knowledge of what he was going to do? Now [Metro Police] are just having us speculate more and more and more,” Craig Island, an attorney for victims of the attack said, according to the Metro 5 report.

“Today is the first time we’ve heard there are additional suspects out there, this contradicts what they have been saying, [Sheriff Joe] Lombardo has said there are no other suspects,” Maggie McCletchie, a lawyer for the media outlets said.

Lombardo had said that Paddock fired more than 1,100 rounds from his Mandalay Bay room on Oct. 1.

“1100 rounds in 9 minutes, even with a bump-fire stock, from one shooter seems implausible. That’s 2 rounds/second not accounting for reloading, or any kind of malfunction. Tough to believe,” tweeted Cardillo.

Hundreds of pages of federal court records, including multiple search warrant affidavits, were released last week but they did not contain updated information about the current status of the investigation.

The recently released documents show Paddock’s girlfriend, Marilou Danley, told investigators who were about to take a DNA swab from her that her fingerprints would likely be found on Paddock’s ammunition, because she “occasionally participated in loading magazines.” Danley denied any advance knowledge of the attack.

The FBI agent who prepared the Oct. 7 affidavit noted that Danley was cooperating with investigators and that the investigation “to date has not produced any conclusive evidence that Danley aided Paddock, had foreknowledge of his plans, or has been deceptive with law enforcement.”

The agent also noted that “this aspect of the investigation is still the subject of intense review.”

A search warrant affidavit filed in the days after the shooting shows Danley was regarded by the FBI as “the most likely person who aided or abetted Stephen Paddock.”