Americans are giving President Trump high marks for his response and leadership during the Wuhan coronavirus crisis, a new poll found.

According to a Harris poll released on Thursday, 56 percent approve of Trump’s handling of the crisis. In less than a week, the president’s general approval rating jumped four points, from 49 percent to 53 percent. 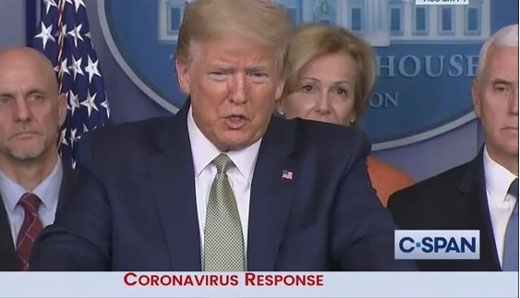 In a March 19 tweet, the twice-failed presidential candidate lectured: “Hospitals are already running out of ventilators and beds. Nurses are using bandanas as masks. If you’ve already ordered more with the Defense Production Act, tell us now. If you haven’t, you’re failing to lead and failing Americans.”

Perhaps Clinton wasn’t watching the daily press conferences Trump and his coronavirus task force have been holding. If she were, she would have seen where Trump specifically cited protective equipment and ventilators as meeting the criteria in the Defense Production Act which he initiated.

On Thursday, Vice President Mike Pence said, “We’ve extended the liability protection so now all the industrial masks that are manufactured as N95s are now available to hospitals, and we’re seeing a dramatic increase in production.”

While the Clinton continued to slam Trump, other Democrats who have had major feuds with the president have praised his coronavirus response.

“Politics aside, this is incredible and the right response in this critical time,” Rep. Ilhan Omar of Minnesota tweeted Wednesday evening alongside a hand-clapping emoji.

The frequent Trump critic and member of “The Squad” was responding to a tweet about the president’s recent actions to combat the coronavirus, including, as the quote read, “suspending mortgage foreclosures, demanding cash payments to Americans, now invoking the Defense Production Act to force private firms to produce needed supplies.”

“@AyannaPressley always says, unprecedented times require unprecedented leadership and we are seeing that in our country right now,” Omar wrote in a second tweet, “I have faith that we will survive this as a nation and build together.”

“Finally, we should never let politics get in the way of good policy. This is a great start and hope others will be part of a united front to push for good policies that will help us work through the economic anxiety the country is feeling right now,” Omar wrote.

Praise from “The Squad” would invite concern about the president’s policies from some circles.

Overall however, approval of Trump’s handling of the crisis appears to be growing day by day, according to the Harris polling.

Pollsters conducted the survey on 2,050 U.S. adults in two waves — one last week, March 14-15, and the second March 17-18. The separate polls demonstrate that Americans across the board are increasingly approving of the way the president is handling the coronavirus pandemic. In the two polls, the number of respondents who approved of Trump’s handling of the crisis jumped from 51 to 56 percent.

The poll also revealed Trump’s situational approval ratings increasing on nearly all fronts. While stimulating jobs remained steady at 60 percent, the president experienced a one-point jump on the economy and “administering the government,” two points on fighting terrorism and handling immigration, and three points on foreign affairs.

Respondents were also asked, “How trustworthy do you think each of the following sources are to provide accurate information regarding the coronavirus outbreak?”

Fifty-seven percent of respondents, during the first poll, indicated that the White House and president were trustworthy. That number also jumped four percentage points just days later, boosting to 61 percent.

According to a new poll from ABC News (whose coverage has been anything but sympathetic towards the president):

“55 percent of Americans approve of the president’s management of the crisis, compared to 43 percent who disapprove. Trump’s approval on this issue is up from last week, when the numbers were nearly reversed. Only 43 percent approved of Trump’s handling of the pandemic and 54 percent disapproved in last week’s poll.”