Addictive opioids can readily be ordered from China and shipped to America via the United States Postal Service (USPS), lawmakers say.

The Senate Permanent Subcommittee on Investigations said that its investigators found through Google searches “hundreds of pages offering to sell” opioids, including highly-addictive fentanyl. 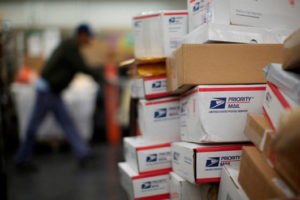 “Thanks to our bipartisan investigation, we now know the depth to which drug traffickers exploit our mail system to ship fentanyl and other synthetic drugs into the United States,” Portman said in a statement. “The federal government can, and must, act to shore up our defenses against this deadly drug and help save lives.”

The committee’s investigators reported they were able to contact six “very responsive” sellers trying to market fentanyl or other synthetic opioids.

“The sellers offered ‘flash sales’ and discounts when the investigators appeared to hesitate, and even tried to ‘upsell’ by offering deals on carfentanil, which authorities say is 100 times more powerful than fentanyl,” the Cleveland.com report said.

The opioid sellers also preferred to be paid in Bitcoin because of its difficulty to trace, but also accepted payment through Western Union, MoneyGram, PayPal, credit cards and prepaid gift cards, the report said.

The committee’s investigators reported being able to obtain payment and transaction records from Western Union and other money transfer agencies that enabled them to identify more than 500 financial transactions by more than 300 buyers in 43 states, totaling $230,000 to the six online sellers.

“Individuals in Ohio, Pennsylvania and Florida made the highest number of purchases,” a subcommittee investigator said.

The opioid shipments came mostly from China with some being sent through an intermediary in Europe before being re-shipped to the United States.

“Using information from the payment services, investigators were able to identify 18 buyers who were arrested and had dealt with the online sellers,” Cleveland.com reported. “They also found obituaries and death records showing that seven buyers died of fentanyl-related overdoses.”

Private parcel services such as Federal Express, UPS and DHL were ordered by Congress after the September 11, 2001 terror attacks to collect names and addresses of anyone shipping or receiving a package. The Postal Service, with a much higher volume of shipments, was waived from from the requirement.