Today is Nov. 3, 2020, and the hour of decision is at hand. In the midst of unprecedented partisan fervor, I am appealing to my fellow Americans to turn off all media and be sensible.

On Jan. 8, 1776, the great American Patriot Thomas Paine wrote the impactful pamphlet “Common Sense” espousing his view that the American colonies should become independent of English rule. An act by itself that could have had Paine incarcerated and murdered by the English Crown for treason. And later each signer of the Declaration of Independence faced the threat of death for signing it. Affixing your “John Hancock” to a document today was very different than when John Hancock signed and called for American independence. 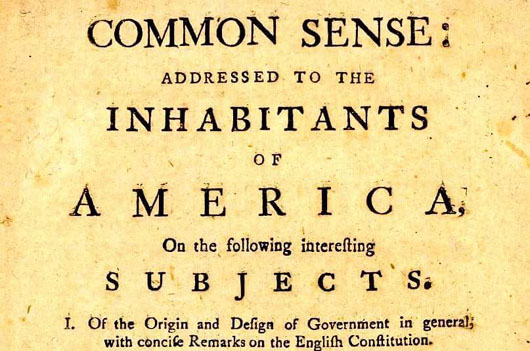 Common Sense was in vogue two hundred and twenty-four years ago for American Patriots. How about today?

The London Times years ago wrote an “Obituary of the Late Mr. Common Sense”. The Obituary continued that “Common Sense lost the will to live as the churches became businesses; and the criminals received better treatment than their victims. Common Sense took a beating when you could not defend yourself from a burglar in your own home and the burglar could sue you for assault”.

“Common Sense was preceded in death by his parents Truth and Trust; his wife, Discretion; his daughter, Responsibility; and his son, Reason. He is survived by his four stepbrothers; I Know My Rights, I Want It Now, Someone Else Is To Blame and I’m A Victim”.

For example, tomorrow America will determine our 46th President. On one hand you have a 77-year old man who is very obviously mentally challenged and whose family has massive ethical issues. The American media is doing its very best to hide the Biden Family issues from our public. Is Common Sense in America dying?!

On the other hand, we have America’s standing 45th President who is a billionaire who left that life to work day and night to fix our republic and donate his presidential salary to worthy causes. We now know that in the third quarter of 2020 all Americans experienced the greatest quarterly growth in our country’s economic history. We know that during President Trump’s first four years that unemployment for African Americans reach an all-time low! We now know that during this same first term that unemployment for Hispanic Americans reached an all-time low! Unemployment for American females reach an all-time low since the rebuilding days after the Korean War and World War II. Jobs not mobs.

But back to Common Sense. I have been studying genealogy thanks to the amazing trove of documents that my Mother left in my care.

Including the Common Sense pieces that I have previously discussed. I was fortunate to earn two degrees from Duke University thanks to a football scholarship and the GI Bill after my Vietnam combat service.

At Duke I learned Descartes’ Rationalism and Locke’s Empiricism. Later in business school we were drilled in Decision Tree Analysis. I recall many times flying combat over Southeast Asia that I didn’t have time for Rationalism or Empiricism. All I had was training, experience and most importantly Common Sense to guide me. Good Ole Common Sense taught to me by my family.

Back in the day on televised college football games I had to call defensive signals on the field in real time. I didn’t have time for Rene Descartes. I utilized my training and Good Ole Common Sense. When the missiles started flying in Laos, I didn’t consult with my John Locke study of Empiricism. I simply reacted using my training and Good Ole Common Sense.

My Common Sense instructs me that Joe Biden isn’t capable of running America. Watching him over the years I never thought the little guy had the mental capacity and I clearly don’t think that he has the physical capacity to occupy the White House.

And today I read where the inimitable Maxine Waters has excoriated African Americans for voting for President Trump. Common Sense tells me that she has incredible problems. Folks like Maxine Waters come in all shapes, sizes, genders and ethnicities. Good Ole Maxine sees color and is eaten up with it. Her issue not mine. I was lucky to grow up in a nuclear family that loved God and Country. I grew up not seeing color. I grew up gravitating to individuals who had character and integrity. Both are color blind. Sorry Maxine, you missed the mark.

In all fairness Obama came to the White House with a quarter page resume and an ability to finally master the teleprompter.

The American energy industry employs approximately eleven million Americans and provides our economy with $1 trillion of benefit each year. Good Ole Joe wants to transform our nation’s energy industry into a new green energy platform. He must have overheard this from Bernie Sanders, Elizabeth Warren or the mental midget Ocasio-Cortez.

Joe Biden’s other campaign mistake was recruiting Kamala Harris as his running mate. For those who want to dig deeper, Good Ole Kamala’s political climb to the present is something I prefer not to lower myself to discuss.

Common Sense needs to be nurtured and cultivated. We all have a choice tomorrow. Use your Common Sense and save America.

John T McNabb is Chairman of Free Press Foundation, Co-Chair of The Council for a Secure America, Co-Founder and Co-Chair of The Trump Leadership Council, former Chairman and CEO of Willbros Group.