Comey wants an apology? ‘When it snows in hell,’ says Gowdy

Disgraced ex-FBI Director James Comey called on his critics to apologize since he was not charged for allegedly leaking to the media classified information from memos of his talks with President Donald Trump.

Comey tweeted on Aug. 29 that the Department of Justice Inspector General “found no evidence that Comey or his attorneys released any of the classified information contained in any of the memos to members of the media.” I don’t need a public apology from those who defamed me, but a quick message with a “sorry we lied about you” would be nice.” 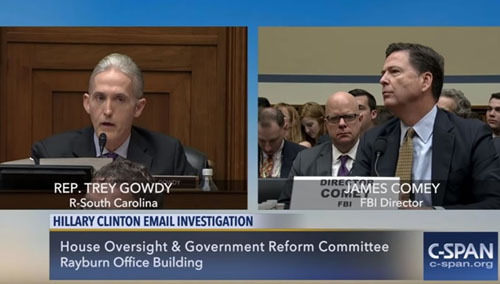 Former Rep. Trey Gowdy, who grilled Comey during a 2016 House Oversight Committee hearing on the Hillary Clinton email investigation, was asked by Fox News whether he plans to apologize to Comey.

“What temperature is it in Hell right now!?” Gowdy replied. “Is it snowing? When it snows in hell, you let me know. Why would I apologize to somebody who has been dinged on both of the major investigations by a guy like (DOJ Inspector General) Michael Horowitz, who is hardly a Republican!?”

Gowdy said of Comey: “He’s a two-time offender. Remember, Horowitz also dinged him for his handling of the Clinton email investigation, so now he gets dinged in the other major case he handled in 2016.”

In his report last week concerning the memos about Trump that Comey had leaked, Horowitz said that Comey “violated Department or FBI policy” by sharing his memos with the media, set a “dangerous example” for his colleagues and sought to “achieve a personally desired outcome.”

Wall Street Journal columnist Kimberley Strassel tweeted on Aug. 29: “IG provides other useful information–more details on Comey’s Jan. 6 briefing of Trump. We now know FBI team hoped during it that Trump wud blurt out something incriminating. This explains why FBI deliberately hid from him its CI investigation. Set up.”

In another Aug. 29 tweet, Comey said he was owed an apology from “all those who’ve spent two years talking about me ‘going to jail’ or being a ‘liar and a leaker.’ ”

Gowdy said: “I never said Comey should or would go to jail,” adding “I’m not going to apologize, but I will give him a piece of unsolicited advice. … You should aspire to more in life than simply skating by without having been indicted.”

Gowdy continued: “If that is in your goal in life — to just not meet every essential element of a criminal offense — and you think you should be congratulated and apologized to for- simply because you were not indicted, you better give back some of those ‘Higher Loyalties’ speaking fees.”

Horowitz, in a report released last summer, blasted Comey for behaving in an “insubordinate” way and engaging in “ad hoc” decision-making during the FBI’s investigation into former Clinton’s use of an unsecure private email server.

Many reviewers said that, in his memoir, “A Higher Loyalty: Truth, Lies, and Leadership,” the fired G-man portrayed himself as a selfless, heroic historical figure.

Gowdy, speaking to concerns from those who say justice hasn’t been meted out here and that Comey is being let off the hook, said:

“I would tell my fellow citizens this: We have to have other ways of meting out accountability other than simply indictments. Hillary Clinton was never indicted, she was never charged, therefore never guilty of a crime, yet the American jury in 2016 meted out a consequence.

“James Comey, whether he likes it or not, all of his past … will be forgotten. God in history will be all of our judges, but they will judge James Comey based on the fact that he got dinged on both of the investigations he was handling in 2016 by the inspector general. That will be the accountability. That’s what history will remember about Jim Comey.”