Conservatives, hoping a Trump administration would focus on combat readiness for the military over “social change within the ranks,” are disappointed that the Defense Department continues to sponsor Obama-era gay pride celebrations.

The DoD hosted a gay pride celebration at the Pentagon on June 12, an event that began under President Barack Obama in 2012. 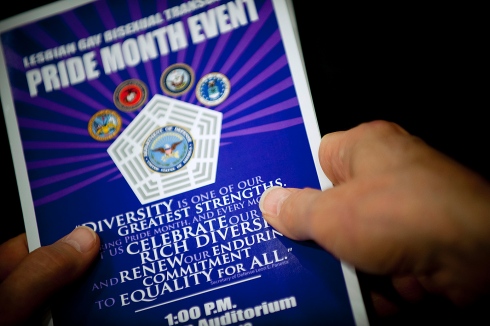 Social conservatives were hoping such official LGBT gatherings would be scaled back under President Donald Trump, Rowan Scarborough wrote for The Washington Times.

“The Trump administration should discontinue funding and directing personnel resources for special-interest events, including LGBT-Pride Month events in June, which do not strengthen military readiness,” said a statement by nearly 100 members of the Conservative Action Project.

“CMR has learned that President Trump has not proclaimed June to be LGBT Pride month, which is good news,” Donnelly said in a message to members. “Activists and Obama holdovers in the Pentagon, however, are proceeding anyway, as if the election never happened.”

Army Lt. Gen. William Boykin, a Delta Force combatant and social conservative activist said: “I was hoping that the Trump administration would put less emphasis on everything that does not contribute directly to enhanced readiness and war fighting.”

Those hopes were dashed on June 2 with an in-house news report “wholeheartedly endorsing” LGBT Pride Month and announcing the celebration, Scarborough’s report said.

“The struggles, sacrifices and successes among the LGBT community continue to shape our history and remind us to uphold tolerance and justice for all,” said a memo from Anthony M. Kurta, a career federal government executive who is filling in as the Pentagon’s top personnel undersecretary during a slowed process to get Trump’s management team in place.

“During the month of June, let us celebrate the diversity of the DoD workforce and rededicate ourselves to equity, dignity and respect for all,” Kurta said.

Robert Maginnis, a senior fellow at the Family Research Council and author of “Deadly Consequences: How Cowards are Pushing Women into Combat”, said that “most conservatives, and especially the Christian communities, anticipated Mr. Trump’s team would stop the social engineering wrecking ball President Obama brought to the Pentagon.”

Maginnis, a retired Army officer, added: “The administration’s failure to stop the celebration of homosexual victories in our armed forces disappoints many of those of us who rallied around Mr. Trump. It could be Secretary (Jim) Mattis and his team are too focused on other important issues to pay much attention to reversing Obama’s wrongheaded social engineering train.”

“That’s always the rhetoric that is going to come out of the far right,” Thorn said. “The Pentagon in particular is comprised of women, African-Americans, Latinos. The Pentagon celebrates Black History Month, Women’s History Month, and celebrates the contributions that service members who come from diverse backgrounds contributed to the military. They’re treating LGBT people just like they would treat anybody else. I don’t see what the problem is there.”