The violence in the streets of American cities is “becoming a problem for election-year Democrats,” a columnist noted.

“Democrats may have hoped that the national reckoning on race would be a favorable issue for 2020. But the street violence has overwhelmed their reform message,” James S. Robbins wrote for USA Today Aug. 31. 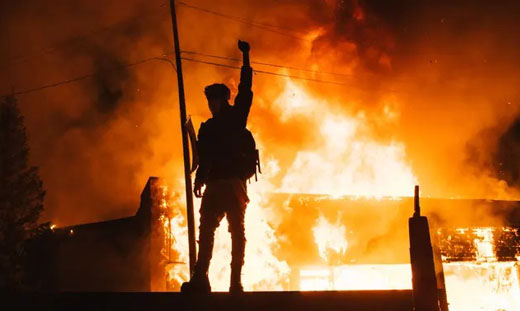 President Donald Trump tweeted: “The Radical Left Mayors & Governors of Cities where this crazy violence is taking place have lost control of their “Movement”. It wasn’t supposed to be like this, but the Anarchists & Agitators got carried away and don’t listen anymore — even forced Slow Joe out of basement!”

The Civiqs tracking poll found that net approval for the Black Lives Matter movement peaked on June 3 and and has fallen sharply since, Robbins noted.

Among whites, net approval is already negative and headed downward, the poll found. And while Democrats and Republicans are as polarized on the issue as one would expect, white Independents have shown a dramatic falloff in BLM support, going from a net 24 percent in early June to just 3 percent now, which is lower than before George Floyd was killed.

The major media “generally tried to downplay the violent aspects of the protests, sometimes going to absurd lengths,” Robbins wrote, citing the example of CNN’s Omar Jimenez, who reported live from Kenosha in front of burning businesses while a chyron described the scene as “fiery but mostly peaceful protests.”

Meanwhile, the “defund the police” movement “has lost its luster as a political issue,” he continued. “Some cities have cut police budgets and reallocated funds to social programs, but positive buzz about this on the national level has vanished.”

The “defund the police” mural that was painted on 16th Street near the White House with great fanfare in June “quietly vanished over two weeks ago,” Robbins noted.

Some commentators have compared this election season to 1968, when Richard Nixon seized the ‘law and order’ mantle in the wake of that summer’s racial riots. Vice President Hubert Humphrey initially tried to straddle the issue, but when he finally gave a speech in mid-October pledging to crack down on street violence, he alienated civil rights leaders like Rep. John Conyers, Julian Bond, and Coretta Scott King.

Biden “is in a similar fix, made more difficult given the much greater strength of minority groups and progressives in the contemporary Democratic party,” Robbins added. “But his real problem is a white electorate that was less engaged with the civil rights cause to begin with and is now turning sour on it. Yes, the riot issue is sticking. President Trump has his answer, sending the FBI and U.S. Marshals to assist in Kenosha. If Joe Biden has a concrete solution to the problem of American cities in flames, he’s keeping it to himself.”