Billionaire globalist Bill Gates “sees himself as the savior of the people,” a columnist noted.

So when Gates says future “pandemic preparedness must be taken as seriously as we take the threat of war” — which he just did, via his Bill and Melinda Gates Foundation’s annual letter — “it sets the stage for worldwide government policy,” Cheryl K. Chumley wrote for The Washington Times on Jan. 27. 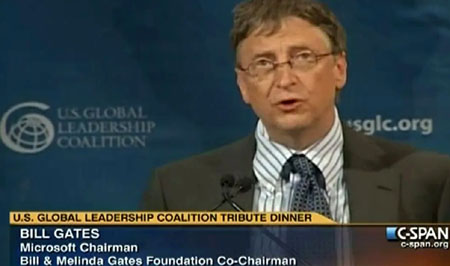 Gates “calls himself a philanthropist, intent only on helping people and offering them better health treatments. But he’s much more than a friendly neighborhood helper,” Chumley noted.

“Gates is an unelected, unaccountable-to-the-people billionaire whose money has allowed him to carry a big policy stick within the world’s largest bureaucracies, including the World Health Organization. What he suggests, advises, recommends morphs quickly into what wonks with WHO suggest, advise and recommend as policy, which in turn morphs into what governments of the world turn into regulation.”

The Seattle Times noted that Gates “argues for the creation of a global corps of 3,000 infectious disease first responders who would spring into action like firefighters when new outbreaks flare anywhere in the world and prevent them from throwing off sparks that lead to runaway spread.”

As Forbes reported, Gates wants these 3,000 responders to also “spend their off time running ‘term games,’ which are ‘simulations that let us practice, analyze, and improve how we respond to disease outbreaks, just as war games let the military prepare for real-life warfare.’”

As Business Standard notes, Gates wants “ ‘mega-diagnostic platforms, which could test as much as 20% of the global population every week.’ ”

When a doctor advocates for such things, “that’s doctorly advice; doctors being doctors,” Chumley wrote.

“But billionaire Gates who sees the world as his playground and the people as his playthings — or more to the truth, who sees himself as the savior of the people — is a different beast. When he calls for billions of dollars to be spent on pandemic preparation, he’s sending a message to the governments of the world that they better spend. When he calls for 3,000 first responders, trained and ready to spring to action at the first whiff of virus, he’s setting the stage to empower health bureaucrats with powers to enforce quarantines, strip citizens of self-rule, force individuals to abide by his will and obey his commands.”

Gates wrote in the foundation letter: “To prevent the hardship of this last year from happening again, pandemic preparedness must be taken as seriously as we take the threat of war. The world wasn’t ready for the Covid-19 pandemic. I think next time will be different.”

Chumley concluded: “That’s a chilling remark from a guy who thinks China, in many respects, handled the coronavirus response better than America. But don’t worry; Gates says his master pandemic preparedness plan is all for your own good.”