CNN pays airports nationwide to broadcast its content, in many cases even paying for the airport TVs. 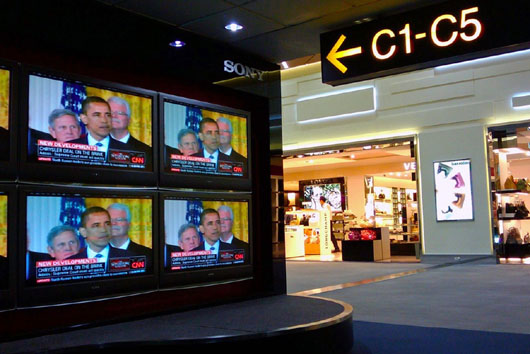 Since the network shifted to a 24/7 anti-Trump propaganda machine, however, many travelers are asking the airports to turn CNN off. Some have started online petitions.

According to Trip Savvy, 20 of the 25 busiest airports in the U.S. are listed as participants in CNN Airport.

“Gate agents do not have a remote control, so the channel cannot be changed and the volume is actually controlled by CNN from a remote location,” Philly.com reported.

“How are airports justifying the idea of bombarding captive viewers with content many of them oppose? Sadly, almost any outlet is fairer now than CNN,” Media Research Center Vice President Dan Gainor told Fox News.

CNN Airport is broadcast in more than 2,400 airport gates throughout the U.S. and is seen by 323 million people annually at travel hubs, according to a CNN Airport media kit.

“We have received complaints about CNN and the content they air,” a Salt Lake City International Airport spokesperson told Fox News before noting there is a “contract in place.”

The Philadelphia Inquirer reports that airports also receive “up to six minutes each hour to promote the airport or local attractions” as part of their deals with CNN.

“CNN Airport covers the costs related to the TVs and related infrastructure, provides programming specifically geared for airports, and pays us for the opportunity to be in our facility,” a representative from Minneapolis-Saint Paul International said.

In 2016, Miami International Airport signed an eight-year contract with CNN that provides the airport “a maximum annual guarantee of $150,000” that may be adjusted annually to ensure the deal is on par with similar airports, Fox News reported.

Author and Academy-Award nominated screenwriter Roger L. Simon wrote that “I’m not sure how to end this CNN dominance of those public spaces, but we all should start thinking about it. Without their stranglehold on those public venues, hardly anyone would be watching the network at all.”