Perv jail doesn’t seem to exist for those who press the Left’s narratives.

Many ignored rape charges and a stained dress and would seem to confirm that. And we speak not just of political or government officials. 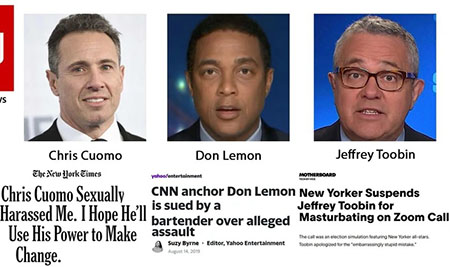 CNN has an entire lineup of such alleged “predators and pervs.”

Media personalities who unconditionally toe the Left’s line, and then allegedly get caught with their pants down, or worse, much worse, go to perv purgatory. Consider:

Chris Cuomo: Soon after he was canned, a prominent Washington, D.C. workplace attorney arranged to share materials supporting accusations by a former colleague of Cuomo at ABC News that he had sexually harassed her there.

“My client came forward at this time because she felt in sharing her story and related documentation, she could help protect other women,” Debra Katz said in a statement. Katz said her client was motivated by outrage over what she said was the hypocrisy of Cuomo’s assertion to viewers of his “profound” concern for the targets of sexual harassment.

Matt Dornic, head of communications for CNN, said that outside attorneys determined Cuomo had committed fireable offenses related to his brother’s (former New York Gov. Andrew Cuomo) scandal, violating the terms of his contract. “When the new allegations came to us, we took them seriously, and saw no reason to delay taking immediate action,” he said in a statement.

Jeffrey Toobin: After spending eight months in perv purgatory, Toobin returned as CNN’s chief legal analyst in June. Toobin had exposed himself during a Zoom call with colleagues at The New Yorker. Toobin said in an interview on the predators and pervs network (CNN) that he is a “flawed human being who makes mistakes” and said his conduct was “deeply moronic and indefensible.”

Don Lemon: A bartender filed a lawsuit against Lemon in August 2019 alleging that the CNN personality assaulted him at a Hamptons bar.

Dustin Hice, who said Lemon jammed his finger in his face after rubbing his own genitals, has said that CNN is “a predator protecting machine’ that is “rife with perverts.”

“This is who they are,” Hice told Fox News. “They’re a predator-protecting machine, they slander and smear victims with impunity. They’ve tried to grind me down, they’ve attempted to intimidate witnesses in my case, they’ve released confidential information about me in attempt to doxx me. They are complicit. This is who they are.”

That sentiment was driven home on Friday when CNN staffer John Griffin was arrested on three counts that he used a facility of interstate commerce to abuse underage girls.

Griffin’s employment with CNN, which began in 2013, included work as a producer for Chris Cuomo and for senior political analyst John Avlon.

According to a Department of Justice statement, Griffin “utilized the messaging applications Kik and Google Hangouts to communicate with people purporting to be parents of minor daughters, conveying to them, among other ideas, that a ‘woman is a woman regardless of her age,’ and that women should be sexually subservient and inferior to men.”

“On these communication platforms, Griffin sought to persuade parents to allow him to train their daughters to be sexually submissive. In June of 2020, Griffin advised a mother of 9- and 13-year-old daughters that the mother’s responsibility was to see that her older daughter was ‘trained properly.’ Griffin later transferred over $3,000 to the mother for plane tickets so the mother and her 9-year-old daughter could fly from Nevada to Boston’s Logan airport. The mother and child flew to Boston in July of 2020, where Griffin picked them up in his Tesla and drove them to his Ludlow house. At the house, the daughter was directed to engage in, and did engage in, unlawful sexual activity.”

The indictment said Griffin “attempted to entice two other children over the internet to engage in sexual activity.”

“We take the charges against Mr. Griffin incredibly seriously,” a CNN spokesperson said on Friday. “We only learned of his arrest this afternoon and have suspended him pending investigation.”

CNN’s lineup of ‘predators and perverts’: New charges add to body of evidence added by Editor Two on December 12, 2021
View all posts by Editor Two →