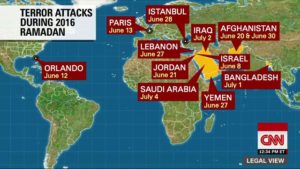 “Updated map: This graphic shows the extent of terror attacks throughout Ramadan in 2016 ,” the network tweeted, including sites such as Orlando, Paris and Istanbul but leaving out attacks last week against Israeli citizens of Judea and Samaria in which 13-year-old Hallel Yaffa Ariel and Rabbi Michael Mark were killed.

Along with outraged readers, Israeli diplomats reportedly voiced their anger at CNN for the omissions. CNN later apologized.