Hillary Clinton, whose campaign is flush with Wall Street cash, risks losing a large chunk of that support if she selects anti-Wall Street Sen. Elizabeth Warren as her running mate, sources say.

“If Clinton picked Warren, her whole base on Wall Street would leave her,” one donor, who has raised millions for the Democratic candidate, said. “They would literally just say, ‘We have no qualms with you moving left, we understand all the things you’ve had to do because of Bernie Sanders, but if you are going there with Warren, we just can’t trust you, you’ve killed it.’ ” 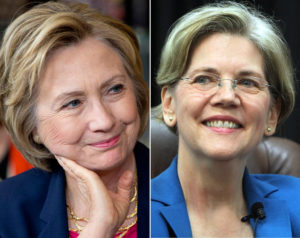 The securities and investment industry has donated $28.3 million to Clinton, according to the Center for Responsive Politics.

One Democratic donor told Politico: “There is no upside to my talking to you on the record. Either I piss off the Clinton campaign or I piss off Warren, or both.”

“Picking Warren would indicate weakness and panic for no reason and make them look like they are running scared of Trump,” a senior Wall Street executive who is close to Clinton said. “There will be plenty of time to galvanize the left and get them to come out. And Warren would be a nightmare to try and manage.”

Rumors of Warren as a possible VP pick swirled on June 17 when the Massachusetts senator met with Clinton.

Donald Trump’s response to news of Warren’s possible spot on the Democratic ticket:

“Pocahontas is at it again!” Trump tweeted, mocking Warren over the Native American heritage she described during her 2012 Senate campaign. “Goofy Elizabeth Warren, one of the least productive U.S. Senators, has a nasty mouth. Hope she is V.P. choice.”