Hurricane Matthew killed at least 42 Americans, 22 in North Carolina, and caused some $9 billion in damage.

Apparently, that wasn’t devastating enough for the alarmists who believe climate change is the biggest security threat on the planet. 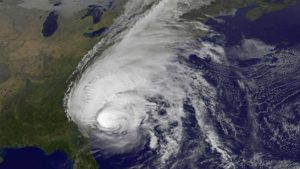 As Matthew was hugging Florida’s coast, Marshall Shepherd, a professor in atmospheric sciences at the University of Georgia, tweeted about the “ridiculous complaining” he was seeing about the hurricane being less severe than expected.

“Some seem disappointed there isn’t tragic loss of life/apocalyptic,” he said.

Before Matthew made landfall in South Carolina, it had been more than 4,000 days since the last hurricane hit the U.S.

“The alarmists were itching for a large-scale disaster because every day that went by without a hurricane, especially an epic one, meant that their predictions that man-made global warming was going to cause more and bigger storms was another day that made them look like the cons and hopelessly conned that they are,” Kerry Jackson wrote for Investor’s Business Daily.

One of the alarmists, Tofino (Vancouver Island) councilor Greg Blanchette tweeted in 2014 that he “kind of” hoped that North America “gets its ass kicked this hurricane season. It would motivate us on climate action.”

British naturalist David Attenborough said that “disaster” was needed to wake people up to the threat of climate change.

The “disasters” the U.S. had experience up to that point “with hurricanes and floods”, he said, “doesn’t do it,” so the crisis he was been hoping for must be truly cataclysmic.

So, for example, the 10 to 12 feet of water that engulfed the North Carolina town of Princeville wasn’t enough?

Princeville is the oldest town chartered by Africa-Americans in the nation. It was settled by freed slaves after the Civil War and incorporated in 1885.

As Jackson wrote for Investor’s Business Daily: “The environmental movement is filled with haters who yearn for a planet without man.

“Attenborough himself lamented to the British press that humans are a ‘plague on the Earth.’ He was probably looking forward to Matthew the way a child looks forward to a trip to the amusement park.”