Last week we detailed how an Obama “Youth Jobs” program blossomed into today’s climate of overt racial hatred in the workplace in the name of “economic justice.” Powerful corporate backers are promoting the worst kind of racial divisiveness, including explicit hostility towards white people, in this the summer of George Floyd. Readers are urged to ponder just why this is. A wealthy corporate ruling class clearly seems to believe that ratcheting up racial animosity in America will help further its private financial interests. Below is another glaring example.

Prosperity Now is an organization whose declared mission is to ensure that racial minorities have “a clear path to financial stability, wealth and prosperity.” 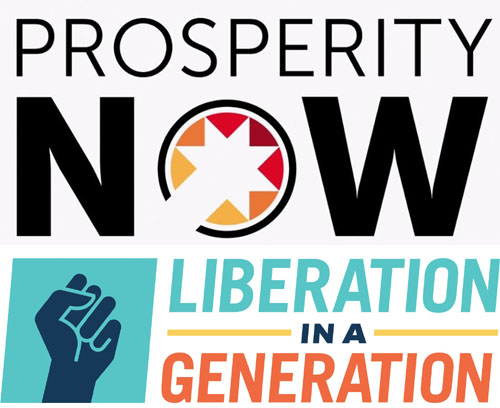 Sounds reasonable enough. However, in 2020, such a goal has been converted into the larger radical cause of overthrowing “systemic oppression.”

Prosperity Now seeks to weaponize the idea of “economic injustice” to promote the redistribution of wealth to racial minorities and open the floodgates to unchecked Third World immigration. Even keeping foreigners with criminal records from coming to America is seen as a form of racial oppression from this obsessive lens.

The organization sees the U.S. tax code as a tool of institutional racism. It has called for “providing every child with a meaningful birthright investment to narrow the massive racial wealth divide.” This would be New Jersey Democrat Sen. Cory Booker’s “Baby Bonds” bill – a massive cash handout to minorities. Yahoo Finance reported in 2019 that:

As a “birthright,” the bill proposes, every child would be given a $1,000 savings account. Each year, the government would deposit as much as $2,000 into the account, depending upon the family’s income level. The poorer the family, the more money the child would get.

What makes the idea of such handouts all the worse is that Prosperity Now doesn’t believe silly things like citizenship matter. According to its vision, illegal aliens are “members” of a nation too and should be financially supported by the government as well. A post on the group’s website declares that not giving illegal aliens COVID-19 relief is a sign of economic oppression against minorities:

The COVID-19 crisis has exposed in a dramatic way the deep inequities that exist in our society. It has also posed essential philosophical questions about the society’s own structure. How can a democratic society advance while permanently excluding large segments of its members [they are talking about illegal aliens here] from accessing basic financial and other supports? The pandemic has also revealed some immediate public health implications of social exclusion. If a large portion of our country’s workforce has no choice but to work, even when public health guidance mandates the population to stay home, the health of everyone in our communities is put at risk.

In 2019 Prosperity Now announced “our partnership with the broad-based political organizing initiative, Liberation in a Generation, which aims to advance economic liberation for people of color.” This group was to be founded and led by former Prosperity Now staffers:

This new, independent organization will be co-led by Jeremie Greer, Prosperity Now’s outgoing Vice President of Policy and Research, and Solana Rice, our outgoing Director of State and Local Policy. Jeremie and Solana will become co-executive directors of Liberation in a Generation.

We are aiming to create political and economic change where people of color prosper. This means tearing down systems of oppression that extract from, devalue, and exploit Black, Latinx, low and moderate income Asians, and Indigenous people. It means building a Liberation Economy where all people of color have our basic needs met, are safe from harm, are valued, and belong…. To accomplish this we must fight to dismantle, what we call the Oppression Economy.

“Dismantling the Oppression Economy” is a listed “Policy Platform” for Liberation in a Generation. The organization believes this abusive economic system is a heritage crime dating back to the founding of this nation:

Since the first settlers arrived in the US to this very moment, elite institutions and the individuals who control them have used the racist tools of theft, exclusion, and exploitation to expand their wealth and power. In order to win liberation, we must tear down the racist economic systems that fuels the Oppression Economy.

How to tear it down? Ending “the criminalization of people of color” is one prime solution. This again includes allowing racial minority foreigners with criminal records to freely migrate to the U.S.:

The language is in fact shockingly brazen:

The fear of being declared a ‘Public Charge’ is a real deterrent for immigrants seeking documented legal status, as it could negatively affect their prospects. The exclusion of undocumented immigrants and people with criminal records from basic social and human services must end!

As financiers of racist practices such as slavery to being responsible for the subprime mortgage crisis, financial institutions have been front and center in the creation of our economy’s most oppressive policies and practices. To maintain their stranglehold on the Oppression Economy, these elite institutions have created a dual financial system in which mostly White households can build wealth, while people of color are largely excluded from building wealth or stripped of the little bit of wealth they may own. To dismantle the Oppression Economy, we must end this dual financial system.

The group’s two Prosperity Now co-founders openly exhibit a loathing of white people in their personal statements and policy pronouncements. In a January Medium.com article, Liberation in a Generation co-founder and former Prosperity Now VP Jeremie Greer reveals a seething resentment of all white people while saluting former NFL quarterback Colin Kaepernick for his racial revolutionary rabble rousing in the world of professional sports (bold added):

#IAmKap because I no longer give a shit about White people’s comfort, particularly when my presence is the source of their unease. I understand that this position will be branded by some as radical and divisive. I sustain that this type of branding is a trap used by the powerful to mutes [sic] our voices and render us invisible. In order to win liberation, making White people uncomfortable is unavoidable, so I contend we stop trying to set them at ease. The path to liberation for Black people rests on our ability to lift our unfiltered voices and stand in defiance of White supremacy and those who benefit from its existence.

In 2019, Greer tweeted that all supporters of President Trump are racists:

Let’s finally cut through the BULLSHIT and acknowledge this truth. The Trump Campaign strategy is to run on racism and white animus of black and brown people. If you support him you support this strategy and this vision for the country…period end of conversation.

Greer’s fellow Liberation in a Generation co-founder, former Prosperity Now director Solana Rice, has frequently attacked the entire history of this nation as being defined by “racism and white supremacy.” In December, former Bill Clinton Labor Secretary Robert Reich tweeted out a video clip in which Rice states that:

To understand this struggle in America we have to look at the role of race in our economy. For people of color in the U.S., the root of our financial insecurities stems from institutional racism and white supremacy that has existed since the founding of this country.

Check out our latest video on the racial wealth gap with @SolanaRice, co-founder of @LiberationIn.

It’s past time for a reckoning. pic.twitter.com/6vVX63VNRm

Rice has even tweeted that the way white people live is killing people of color by triggering climate change:

And this research about the causes of air pollution (as an example of climate devastation) also underscores that Black and Latinx people pay the price for largely White consumption. Climate change means changing an oppression economy.#DemDebate https://t.co/MtSzKU10Tm

Liberation in a Generation Vice President Lillian Singh has openly admitted that the group’s “economic justice” cause is not about creating an equal playing field:

It’s imperative…the case has been made for movement, Will We Respond? https://t.co/DJgJPOPfdL

Now take a look at some of the corporate bigwigs associated with these race-baiting radicals. Prosperity Now’s Board of Directors is filled with powerful and extremely connected people.

Jamie Kalamarides, president of Prudential Group Insurance, is a member of the board. According to his Prosperity Now bio:

Kalamarides is frequently quoted by Institutional Investor, Pensions & Investments and The Wall Street Journal. Kalamarides speaks often at AARP, The Aspen Institute, and U.S. Chamber of Commerce forums. He has also appeared on Bloomberg, CNBC, CNN, C-SPAN and NBC News.

Brandee McHale, “president of the Wells Fargo Foundation as well as head of Corporate Philanthropy and Community Relations at Wells Fargo & Company,” is also on the Board.

In 2009, President Barack Obama nominated Kanter to serve as the U.S. Under Secretary of Education, with oversight responsibility for all federal postsecondary statutory, regulatory and administrative policies and programs for the U.S. Department of Education, including the $175B annual federal student aid programs, higher education, adult education, career-technical education, international education and 6 White House Initiatives.

The organization can also count on the active financial support of numerous corporate backers. Prosperity Now’s 2018 “Prosperity Summit” was dotted with big-box corporate supporters. Bank of America and Citi were listed as “Platinum sponsors.” PayPal and TD Bank were “Gold sponsors.” Under the heading “Special sponsors” were The American Cancer Society (what?), Charles Schwab Bank and PNC Bank. “Silver sponsors” included BB&T, Capital One and the MetLife Foundation. “Exhibitors” at the summit included Intuit, JP Morgan Chase & Co and Wells Fargo.

The AARP Foundation and the American Cancer Society are listed under “Foundations and Non-Profit Partners.”

The turn to frank and open revolutionary dialect by these corporate-sponsored radicals should give pause to all Americans of good will. The wealthy ruling class is actively fanning flames of anger and resentment to the point where people are being killed.

For years, citizens have been warned that a big-box monopolist economy would lead to a form of social tyranny. Furthering racial and any and all other divisions in this nation is a way to cement that control. It’s not just a question of inferior quality in the name of convenience anymore. Feeding these multinational corporations endangers American lives. It endangers your life. Buy local. Buy American. And starve the nation-destroying beast.