The residents of the Capitol Hill Organized Protest (CHOP), Black Lives Matter, Antifa, and other assorted anarchists and progressives pushing the Democratic Party further to the left “are clarifying what is at stake in the 2020 election,” a columnist noted.

“Why should Trump send in the troops when the radicals are working so hard to re-elect him?” James S. Robbins wrote for USA Today on June 24. 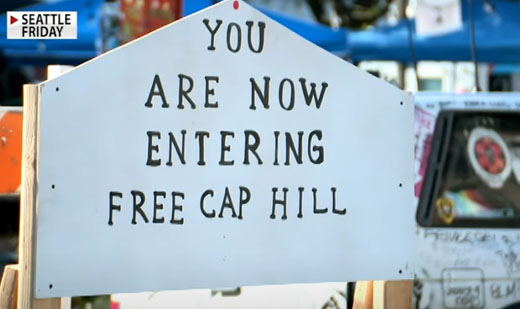 During his rally in Tulsa on June 20, President Donald Trump took the cue from Democratic mayors and governors telling him not to intervene in the so-called “protests.” Speaking about CHOP/CHAZ, the president said “it’s probably better for us to just watch that disaster.”

After all, Robbins noted, “the urban chaos frequently pits liberal officials against the radical progressives in their midst.”

Most of the cities racked by rioting, such as Minneapolis, Atlanta, Chicago and Seattle, have been run by Democratic politicians for several decades.

Police chiefs in these cities “are frequently minorities and or women,” Robbins noted. “Seattle Police Chief Carmen Best, for example, is an African American woman running a mostly white force in a predominantly white town. It’s hard to see how this could happen if systemic racism is so pervasive.”

“Liberals rushed to explain that protesters do not literally want to defund police,” Robbins wrote. But, socialist Rep. Alexandria Ocasio-Cortez “pushed back, warning Democrats not to ‘repackage’ the anti-police message to calm the nerves of ‘white suburban swing voters.’ And activist Mariame Kaba reinforced the point in a New York Times opinion piece headlined, ‘Yes, We Mean Literally Abolish the Police.’ ”

In Washington, D.C., Mayor Muriel Bowser ordered “Black Lives Matter” painted on 16th Street leading to the White House, “to great praise from pundits,” Robbins noted. “But the Black Lives Matter D.C. chapter dismissed it as a ‘performative distraction’ to ‘appease white liberals while ignoring our demands.’ They have a point. Bowser’s new city budget augments rather than defunds police budgets.”

Robbins continued: “Traditionally African American neighborhoods are being redeveloped or bulldozed, displacing generations of D.C. residents and the unique culture of what was once affectionately called Chocolate City. Invariably the people moving in are young white liberals. This trend reached a symbolic nadir last year when an insolent white newcomer suggested that if Black students at the revered historic Howard University did not like outsiders walking their dogs across campus then Howard should move elsewhere.

“Sometimes karma comes knocking for liberals. ESPN sportswriter Chris Martin Palmer tweeted, ‘Burn it all down’ when mobs torched Minneapolis buildings. But when a similar mob showed up in front of his building after destroying a local Starbucks, he tweeted ‘Get these animals TF out of my neighborhood.’ Olympia (Washington) Mayor Cheryl Selby was on board for the movement, until rioters clad in black garb targeted her home, at which point she griped about ‘domestic terrorism.’ Hollywood liberals obsequiously voice their support for the Black Lives Matter cause, though Beverly Hills banned protests after 9 p.m.”

Then there’s CHOP. The autonomous zone, Robbins noted, “is the epitome of the current radical trend. Mayor Jenny Durkan likened CHOP to a ‘block party’ that could become a ‘summer of love,’ while the AP depicted a grumpy Trump ‘fuming’ over the creation of this ‘festive zone.’ But CHOP, a graffiti-marred, cop-free commune of funky free spirits patrolled by armed socialist militias, is precisely the vision of future America that plays to Trump’s ‘law and order’ message. Mayor Durkan is a real-life stereotype of the accommodating liberal who allows progressives to run rampant at the expense of intimidated residents who just want life to return to normal.”