According to the strained logic of many of Hillary Clinton’s partners in the major media, if they repeatedly declare her the winner from August through October, then maybe some of Donald Trump’s supporters will buy their message and stay home, according to analysts who asked not to be identified because they have jobs they cannot afford to lose.

On the other hand, there is reality, which Clinton’s media pals will never acknowledge (see: WikiLeaks), the analysts said. One of the most accurate gauges of past presidential outcomes shows Trump is not only still in the running, but in the lead. 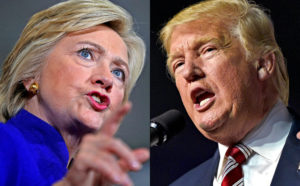 According to the latest IBD/TIPP presidential tracking poll, Trump leads by 2 percentage points — 43 to 41 — in a four-way race.

The poll is conducted by the Investor’s Business Daily (IBD)/TechnoMetrica Institute of Policy and Politics (TIPP).

Libertarian Party candidate Gary Johnson was at 7 percent in the latest poll and the Green Party’s Jill Stein at 3 percent.

The IBD/TIPP poll includes responses from 783 likely voters, with a weighted partisan breakdown of 282 Democrats, 226 Republicans, and 259 Independents.

“Over the long term, our own tally shows that for the 2004, 2008 and 2012 elections IBD/TIPP’s average prediction for the final presidential vote margin was the most accurate, with a difference of a mere 0.9% between our predictions and the final outcomes for all three years,” Investor’s Business Daily said.

Meanwhile, Clinton’s media supporters continue to push the narrative that the race is over.

According to The New York Times, Clinton is “working to ensure a victory that is decisive enough to earn a mandate for her presidency.”

The Washington Post reported that “emboldened by polls predicting an electoral-college landslide in the presidential race, Clinton is shifting her strategy to lift up other Democrats coast to coast.”

Politico reported that Clinton “is now more focused on electing other Democrats in the final days of the 2016 campaign than her Republican opponent.”