Chinese Americans stood out at Jan. 6 rally: ‘I am from China; We know what corruption means’

To those arriving at the Jan. 6 “Stop the Steal” rally in Washington, D.C., one surprising and unexpected show of support for President Donald Trump came from Chinese Americans.

Signs fastened atop parked cars lined the approach to the Mall, denouncing Chinese Communism and the Chinese Communist Party (CCP). On sidewalks, Chinese Americans gathered signatures to abolish the CCP. Across the street from the Washington Monument, a unit of white tents housed the activities of the “Chinese American Alliance for Trump” distributing banners. Orange shirts bore the group’s logo on the front and on the back “Fight for USA,” “Return to God.”

Descending the hilltop of the monument toward the rally’s large outdoor screen, one encountered tens of thousands of Trump supporters gathering for the event. In their midst and prominently displayed on the hillside, orange-clad Chinese Americans for Trump held a string of banners one hundred yards long.

The words printed on them: “Fight for Trump — Never Ever Surrender,” “Chinese Americans Fight for Trump — Keep America Great,” “Stop the Steal.” Another banner laid out on the ground exhorted legislators, “Uphold Law or Commit CCP Treason.”

Questioned about the size of the Chinese turnout for Trump, organizer Mr. Yan explained: “Only when everybody fights this battle together can we keep this country on the right path. We immigrants love this country. We think we love this country more than some politicians do. I think a lot of politicians care about their own power. They want to exalt themselves rather than honor the country and honor God. If we don’t stand up, this election result is going to turn this country around and take it in the wrong direction.”

Supporters, who came from 15 states, some as far as California, reported they connected through their churches. A resident of Shanghai shared sentiments in keeping with others we spoke with: the political and spiritual ramifications of this election are inseparable in the minds of “Chinese Americans for Trump.” Their common experience is that socialism and communism are the political embodiment of moral and spiritual evil contrary to the good of humanity. 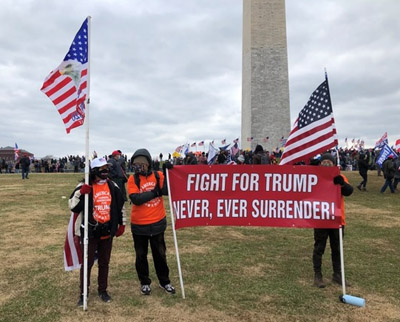 The Shanghai visitor became a Christian a year ago and related: “I believe this is a historical moment. I think right now is the key point in time for the United States. If we lose this opportunity it is a disaster. The United States is like the city on top of the mountain. It is the model for the world. I think I understand a lot of the Chinese people. We have the same thinking. We come from a communist country. We know what it is. The sad thing for the United States is those who believe socialism is a good thing. I hope we can wake up some American people that the socialist reality is the Devil.”

Ellen Lee Zhou, who ran as a candidate for mayor in San Francisco, held an American flag and stood beside a red and white banner, “Fight for Trump. Never, Ever Surrender.”

“Many of the Chinese get persecuted in China because they believe in God, they believe in Jesus. I met quite a number of people today who escaped from jail time in China just because they believe in Jesus. I myself am a Jesus follower. You say that In God We Trust. We came to America because we believed that America is a land for freedom. My parents brought me here because we believe in freedom. That is why we have a lot of Christians here. We believe that it is important for Christians here in America to stand up and take back our nation and restore it for Jesus Christ.” 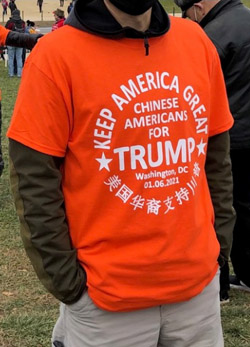 Asked about the significance of this election for the country, Zhou said: “The 2020 election is not about Republican or Democrat. It is about the evil behind the Democrats. They tried to take down America and paid and bought a lot of election officials. That is how we found all this corruption. Dead people applied for the process. People dead 25 years voted. That is called corruption. That is called evil. If this election is not overturned, America will not be America anymore. The Bible says the Devil comes to steal, destroy, and corrupt. This election is being stolen. It is destructive, and corrupt. Three hundred million people will not accept a thief to lead our nation into darkness. I am from China. We know what corruption means.”

A Malaysian immigrant of Chinese descent framed our political precipice pointedly. Here for 20 years and now a well positioned professional in an intellectually demanding field, he observed:

“This is pretty much the last nail in the coffin. Imagine fraudulent elections like this that we are seeing, with the evidence showing it out but no one reporting it. Guess what happens for the next election? We already have a taste. Georgia. The exact same pattern happened. If we let it go, what will happen in two years? The same exact thing. Because it worked, it will grow. If we do not cut the tentacles now it will be either secession or civil war in the end. I’m not saying that right now that its heading there. But that’s where it’s eventually going. I applaud President Trump for trying to follow to the last dot the Constitution, but at some point, and I’m not suggesting it, I’m not promoting it, however at some point, if we don’t cut the tentacles and the corruption and it grows large enough, it will fall back to the last resort. Like the Founding Fathers said, when time passed liberty will need to be washed by blood again.”

R. Clinton Ohlers, PhD (University of Pennsylvania) is a historian of science and religion and a contributing editor for the FreePressMediaGroup. Previously, he held the position of Research Assistant Professor in the Humanities at the University of Hong Kong. His book, The Birth of the Conflict Between Science and Religion, is scheduled to appear in 2021.