Chinese officials and state-run media have been boasting about how China invented high-speed rail, mobile payment, e-commerce, and bike-sharing. 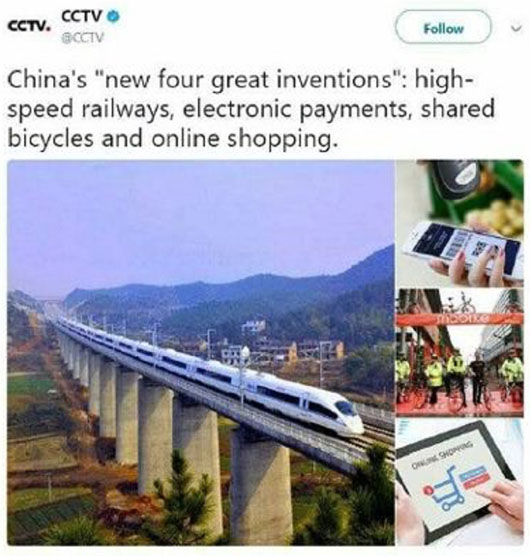 In a December 2017 tweet, the Global Times referred to them as “China’s ‘four great new inventions’ in modern times.”

Except, all four of the inventions are not China’s. They were invented decades ago, the BBC noted in an April 3 report:

So why does China continue to claim the inventions?

“The term ‘four new inventions’ harks back to the ‘four great inventions’ of ancient China – papermaking, gunpowder, printing and the compass,” the BBC noted.

According to the World Economic Forum, China is second to the United States in research and development spending as Beijing seeks to become what it calls an “innovation nation” by 2020.

“After years of subordination to the technological supremacy of developed nations in the West, China has come to realize the importance of developing core technologies on its own. Only by doing so can it truly gain independence and win respect from both partners and competitors,” the state-run Xinhua news agency said.

Xinhua’s article noted that “Among the four, high-speed rail and online shopping aren’t from China, but we bring the inventions to the world’s top level with our intelligence and innovation and make them China’s calling card.”

While the “four new great inventions” may hot have originated in China, Beijing “has outpaced other countries in the widespread adoption and adaptation of all of the four technologies,” the BBC said.

China’s total mobile payments in the first 10 months of 2017 stood at $12.7 trillion, the world’s largest volume, according to China’s Ministry of Industry and Information Technology.

With more than 700 million Internet users, China is also the biggest and fastest growing e-commerce market in the world, according to a 2017 study by PricewaterhouseCoopers.

In February, the vice minister of China’s Ministry of Transport said that there are 400 million registered bike-sharing users and 23 million shared bikes in China.