The 2020 presidential election will be marked by an inundation of mail-in ballots, individuals casting multiple in-person ballots, and the chaos of conducting an election amid media-generated coronavirus fear. 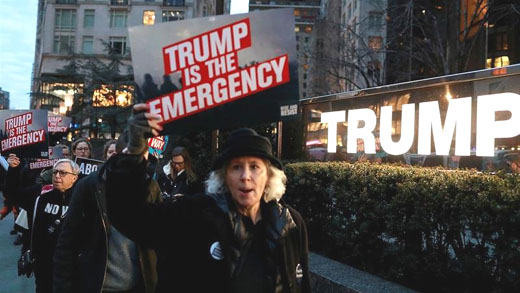 “Over the next sixty days we will be treated to the greatest political show on Earth as the Democrats and their handlers in The Davos Crowd pursue the biggest lie since Climate Change,” wrote Tom Luongo via The Strategic Culture Foundation. “The events of 2020 are lining up for a climax to this story that ends with only one outcome, a contested election which fuels a coup attempt after the election results come in on Nov. 3.”

Democrats have used the covid lockdowns “to create an army of ready-made protesters with nothing else to do and little hope for the future,” Luongo noted. “They structured all aid to the middle class to run out during the height of the election campaign while blocking any further assistance even though the Treasury Dept. raised nearly $2 trillion to deploy as support and stimulus.”

The major media, Luongo ntoed, “endlessly stoked fear over COVID-19 to push as many voters to consider mailing their votes in (or create the illusion that is what will happen) to delay certification of the election on election night.”

President Donald Trump, “to his credit hasn’t acted the way he was supposed to,” Luongo wrote. “He has governed this chaos exactly the way a majority of Americans want him to, as a Federalist. Even though he has the authority to do so, he’s refrained from sending Federal troops into rioting cities, laying bare just how much local authorities are aiding the violence.”

As of today, the election looks like it is Trump’s to lose, Luongo noted.

So, how do Democrats shift the dynamic back in Joe Biden’s favor between now and Election Day to keep the election close enough for them to steal?

“More violence is how,” Luongo wrote.

The so-called White House Siege begins on Sept. 17. It is organized by Adbusters, which Luongo noted “is a front for George Soros’ partner in crime, David Brock and Media Matters For America. White House Siege is a planned 50-day protest in Lafayette Square in Washington D.C., ostensibly to protest President Trump ‘stealing the election.’ ”

“I don’t think the worst of the violence is behind us after Kenosha. I think the worst is still in front of us,” Luongo wrote. “The Democrats and the U.S. Deep State are all in on removing Trump from office by any means necessary.”

Writing for Conservative HQ on Sept. 4, George Rasley noted: “To get rid of President Trump and to seize power permanently Democrats will rely on the principles of unconventional warfare.”

Here is how Rasley predicts the Democrats’ plan will play out:

• Prior to the election, Democrat election officials, citing “systemic racism” will announce hundreds of new polling places will be opened in heavily Democrat urban areas in Democrat-controlled swing states, such as North Carolina, Pennsylvania, Michigan, and Wisconsin.

• Election Day morning Democrats across the country will refuse to show-up to open the in-person voting sites in Republican areas, citing the danger of catching COVID-19. Without Democrat poll workers the polls cannot open. Meanwhile, in heavily Democrat areas the polls will open on time.

• As Election Day progresses, citing “systemic racism” Democrats will file multiple lawsuits to keep the polls in heavily Democrat urban areas open past the statutory closing time. Rather than ask for the same extensions in heavily Republican areas the befuddled GOP will do nothing.

• Democrat election officials in Trump states, such as in Harris, Bexar and Dallas counties in Texas and Broward, Palm Beach and Leon counties in Florida will claim they cannot certify a winner by their respective states’ statutory deadlines, holding in abeyance certification of the Electoral College votes Trump needs to finally be declared the winner.

• Arguing “systemic racism” Democrats will go to court to overturn state statutory deadlines for submitting mail-in ballots, such as Florida’s “must arrive by Election Day” rule. Instead, Far Left Democrat judges will substitute their own arbitrary and capricious “standards” of what constitutes a legally cast ballot.

• While Democrat election officials are holding the count open, Far Left organizations and activists will sue to count thousands, perhaps millions, of ballots that are on their face defective or have been suddenly “found” outside the normal chain of custody.

• December 14, 2020, the meeting of the Electors mandated by the Constitution cannot take place because Democrat election officials continue to refuse to certify the results and lawsuits are still ongoing.

• January 2, 2021, Speaker Pelosi convenes the House of Representatives and, citing the precedents established in the 1985 election in Indiana’s Eighth Congressional District, refuses to seat enough newly elected Republican Members of Congress to keep the House in Democrat hands, and prevents the House from fulfilling its constitutional role in deciding a disputed presidential election.

• Mitch McConnell seats newly elected Democrats creating a 50-50 tie in the Senate, with defiant RINO Senators Mitt Romney and Lisa Murkowski threatening to vote with the Democrats on all organizational matters. The Senate Parliamentarian rules Vice President Mike Pence may not vote to break the tie on such matters.

• January 6, 2021 arrives and the Supreme Court has been unable to resolve the multiple appeals from lawsuits filed over the counting of ballots, leaving the election still undecided on the day the Electoral College ballots are supposed to be publicly counted and the winner of the election officially announced.

• January 20, 2021, because Chief Justice Roberts is still seeking consensus on the Supreme Court, the election remains undecided on Inauguration Day. According to the Presidential Succession Act of 1947, Speaker Pelosi will act as president until the House resolves the contingent election for president or the Senate picks a vice president to replace Pelosi as acting president ex officio.

• Acting President Pelosi demands that President Trump vacate the White House and declares that all Trump appointees are fired, and their authority is revoked.

• Bureaucrats across the government and the leaders of the military announce they will follow acting president Pelosi’s orders; Trump appointees are put under armed escort and removed from their offices. The Secret Service escorts President Trump from the White House to an “undisclosed location” ostensibly for his own protection.

• Seeing the writing on the wall, Chief Justice Roberts announces that a 5-4 majority of the Supreme Court consisting of he and Ruth Bader Ginsburg, Stephen G. Breyer, Sonia Sotomayor and Elena Kagan have found in favor of the Biden campaign and Democrat election officials, thus setting the stage for the Electoral College to meet and officially elect Joe Biden as 46th President of the United States.

Rasley concluded: “Could the above scenario really happen? Democrats seem to think it could because they have been preparing the information warfare battlefield to justify it. The question is, will Republicans and the Trump campaign be prepared to fight back?”