In 15 months of researching this column, this is literally the craziest Board of Directors seen yet. We are referring to the U.S. Global Leadership Coalition.

Catholic Relief Services right next to Population Services International, which is exactly what the forebodingly bland name implies.

Major corporate executives from well-known brands such as Chevron, GE, UPS and Walmart openly and unapologetically side by side with leftist pro-immigration outfits like CARE and the International Rescue Committee. We’ve seen the corporations before, but not the high-placed execs. 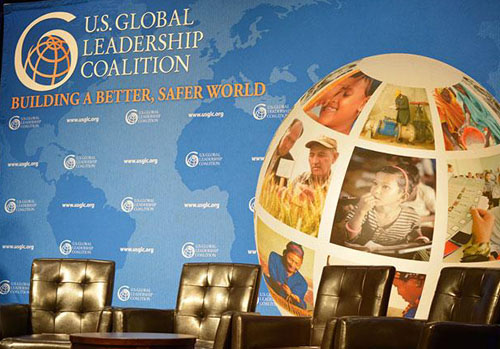 Globalist organizations like the American Enterprise Institute, Brookings, the UN Foundation and the U.S. Chamber of Commerce and defense contractors Boeing and Lockheed Martin abound as well. And just what the heck is Sesame Street doing here?

The U.S. Global Leadership Coalition (USGLC) is an organization devoted to the modern values of one-world internationalism. It states that it “works in our nation’s capital and across the country to strengthen America’s civilian-led tools — development and diplomacy — alongside defense. By advocating for a strong International Affairs Budget, the USGLC is working to make America’s international affairs programs a keystone of U.S. foreign policy.”

The aim, which has been wildly successful in recent decades, is to create a de facto corporate-careerist Swamp axis of U.S. foreign policy built to survive the vagaries of various presidencies and insulated from the pesky will of the American people.

One of the most thoroughly alarming aspects of this year of turmoil that is 2020 is how corporations have now become so willing to openly identify themselves with such deeply controversial issues as abortion, immigration and globalist trade policies. You would think they would be quiet about it for business reasons. But no. They apparently aren’t afraid of consumer boycotts. The possibility does not deter them from actively pursuing this bold new globalist order. It reveals a particularly strong commitment to a goal that should not be shrugged off.

Catholic Relief Services and PSI are both members of USGLC’s “Chairman’s Caucus” of Coalition Members. “As the USGLC’s most dedicated supporters, Chairman’s Caucus members represent the organization with the most senior Members of Congress and the Administration,” USGLC declares on its website.

“Adolescents & Youth,” “Safe Abortion” and “Sexual & Reproductive Health” are three of the main action items listed under the “What We Do” category on PSI’s website. A major focus of its work is in Africa, especially within West African nations that have restrictive anti-abortion laws. Bringing the abortion pill to the continent is a top priority:

“PSI will use insights about women’s preferences to increase reproductive health options and use commercial marketing techniques to promote new products, such as medication abortion, in several countries in West Africa. It will also test innovative models that require less infrastructure to distribute reproductive health products and look for opportunities to provide alternatives for women who otherwise would seek a clandestine abortion.”

Check out PSI’s Board of Directors. Prominent corporate names KPMG, Pfizer and Visa are right there intimately associating themselves with a group devoted to abortion. Heck even food delivery service DoorDash is represented. Wild.

Once again, we see that population control is a key facet of the larger internationalist revolution. It is a revolution PSI CEO Hofmann heartily endorses and defends. He considers the violent Antifa rioters wreaking havoc in Portland, Oregon to be “average folks” just expressing their righteous “anger”:

Antifa? Radicals? Anarchists? As these images show, #Portland protesters are instead often just you and me – average folks, angry about what they see as government overreach. https://t.co/RoHlcdlimJ

PAI, another global NGO devoted to abortion, is also a member of the Chairman’s Caucus for the USGLC. Planned Parenthood Federation of America is a member of the organization’s Leadership Council. Will U.S. bishops take any action against Sean Callahan and Catholic Relief Services over this grave scandal?

The National Basketball Association is another USGLC Coalition Member (Diplomatic Circle). So we have the NBA tucked within the USGLC umbrella alongside an organization (PSI) that is helping to kill untold millions of black babies in Africa. All while the league’s pampered multimillionaire athletes very publicly shout “Black Lives Matter” over a handful of supposedly “unarmed” black males (13 in all of 2019 according to The Washington Post, which has every reason to exaggerate the figure) who refused to follow police instructions here in the U.S. and suffered logical consequences as a result.

Loews Corp. Chairman Andrew Tisch is another member of the Board of Directors for the USGLC. Tisch’s cousin Jonathan Tisch is CEO of Loews Hotels & Co and Co-Chairman of the Board at Loews. Jonathan is Treasurer for the NFL’s New York Giants, who are co-owned by his brother Stephen Tisch.

To showcase their grave concern for this very small percentage of black lives, the Giants, along with all other NFL teams, will have the phrases “End Racism” and “It Takes All of Us” scrolled on the back of the end zones during their home games this year.

Supporting massive immigration and globalist trade policies are two other pillars of the USGLC. Liz Schrayer is CEO for the organization. She is also a member of the Council on Foreign Relations.

She wholeheartedly supports the refugee invasion of the American Heartland:

This is significant and shouldn’t go unnoticed – Governors reaffirming their states are open for refugees. https://t.co/oqtUBDUoO5

David Miliband of the International Rescue Committee, who she retweets here, is on the Board of Directors at USGLC.

What’s more, Schrayer claims the citizens of those states are all for this radical makeover of their neighborhoods. In July 2019 Schrayer penned a hilariously ridiculous article for the globalist think tank the Brookings Institution in which she proclaimed that she was in touch with the grassroots sentiments of Heartland Americans. She just so happened to “discover” that they enthusiastically endorse Internationalism First instead of America First.

“I know, because over the past several years, my colleagues and I have traveled all over the country — district by district, town by town — listening to voters,” Schrayer asserted. “I have met a diverse and engaged electorate in red, blue, and purple America that is not only hungry to talk about foreign policy, but is also hungry for an America engaged on the global stage.”

“But mostly, citizens say ‘It’s the right thing to do,’ ” she stated. “They passionately talk about America as a force for good in the world. It’s very moving and it makes me proud to share the successes of how America — working in partnership with the private sector and NGOs — has made such a difference globally.”

In a 2018 piece for Brookings she admits that President Donald Trump has been a stumbling block to her vision:

“To be clear — the America First era brings new complexity for those of us who believe that U.S. global leadership is central to advancing America’s national interests,” Schrayer wrote. “From engaging our NATO allies to trade alliances, the impact couldn’t be more challenging. Yet, while other international issues have struggled to bridge the partisan divide, a strong bipartisan consensus pushed back against these dangerous proposals to cut our tools of global engagement.”

Those who are dismayed by Trump’s inability to enact his agenda more fully during his first term should keep that last sentence in mind. The president is up against powerful forces that are entrenched within the inner workings of the federal government itself.

Abortionists, entertainment entities, pro sports leagues, major corporations, philanthropies, D.C. think tanks and defense contractors are all aligned to beat back the populist America First wave that washed over this nation in 2016. Yes, even Sesame Street is in their ranks. Knowing your enemy is the first order of the day as this ongoing battle for the soul of this country rages. Studying the USGLC’s Board of Directors and extensive list of Council Members will prove a valuable tool in this endeavor.