The 2012 debate for a pampered republic: Belt-tightening or more pump-priming?

Sol W. Sanders   “Now that no one buys our votes, the public has long since cast off its cares; the people that once bestowed commands, consulships, legions and all else, now meddles no more and longs eagerly for just two things — bread and circuses.” – Juvenal, circa 100 B.C. Thus a Roman satirist […] 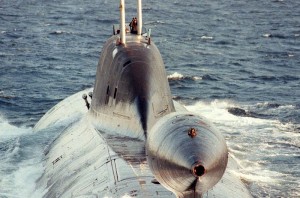 Lev Navrozov “For Almost a Month, Americans Failed to Detect Russian Submarine Near Its Shores” reads the headline on an article by Yelena Sidorenko in the Russian newspaper “Vzglyad: Delovaya Gazeta” (“The View: the Business Newspaper”) of Aug. 15. A Russian “Akula-B”-class nuclear-powered attack submarine of Project 971 (as it is classified by the NATO), […]

Former Cheney official: Neither U.S. party will back pre-emptive strike on Iran

Special to WorldTribune.com TEL AVIV — A former senior U.S. official has warned Israel not to expect help from Washington in any attack on Iran. A former White House adviser ruled out the prospect that Washington would launch a strike on Iran’s nuclear infrastructure. David Wurmser, a senior adviser to then-Vice President Richard Cheney, said […]

How the media treats Joe Biden and how it treats Todd Akin: Who are the real extremists?

Jeffrey T. Kuhner Vice President Joseph R. Biden is mentally unstable, and it’s time for Republicans to point it out. For years, Mr. Biden has been making outrageous comments that reveal not only his low intelligence, but also a dangerous detachment from reality. Yet the liberal media refuse to hold him accountable. Instead, their rationalization […]

Stalin’s dentist: Talent, that mysterious quality, is a rare thing

Lev Navrozov England was our first love. Good Old England. There was no way for us who studied English to go and live there, which was our impossible dream. We got to learn so much about it from books and recordings. Our son studied English by listening to Gielgud’s recitals of Shakespeare’s poems. He imitated […]

Hotel California: Those who can have already checked out

Wesley Pruden LOS ANGELES — Not for nothing do the bundlers, bag men and swag agents call California the golden state. They decamp here early and stay late. A lot of the money they raise for the campaigns is collected in California. But the presidential candidates themselves spend their time mostly elsewhere. California, with its […]

The Cheney precedent: Will Ryan serve as ‘assistant president’?

Sol W. Sanders   Jack Garner, a Texan whom Franklin Delano Roosevelt chose as his first vice president for “balance,” put it succinctly: The vice presidency was “not worth a bucket of warm p–” (later cleaned up to “spit”). But Garner, ironically enough, helped block FDR’s power grab when that most charismatic of presidents tried […]