Days after the city council voted to require the Covid jab for all city employees, a captain in the Los Angeles Fire Department (LAFD) said he and his entire crew will not take the vaccination. 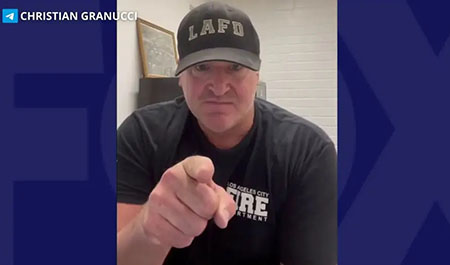 “This is tyranny. This is about freedom of choice,” Christian Granucci said in a video first posted to Telegram.

Under the city council’s order, non-exempt employees have until Sept. 7 to get the first dose of the Moderna or Pfizer vaccine and the second dose must be taken no later than Oct. 5. Those electing to take the Johnson & Johnson vaccine have until Oct. 5 to be inoculated.

Granucci also threatened legal action over the city’s vaccine mandate, saying he and a group of firefighters have an attorney “on retainer.”

In a statement issued after Granucci’s comments, the LAFD said: “While we respect the individual’s right to his opinion, he is not authorized to speak on behalf of the Department. The individual is in uniform and appears to be on duty, thereby giving the impression that he is speaking in an official capacity. Therefore, the matter has been submitted to our Professional Standards Division for investigation, which may lead to disciplinary action.”

Freddy Escobar, president of the United Firefighters of LA City, said in a statement: “Similar to the debate taking place throughout our country over vaccinations, there is passionate discussion regarding this issue in our fire stations. The majority of our firefighters have voluntarily been vaccinated and more are choosing to do so each week. We continue to encourage our members to get vaccinated, but we do not support any City policies that make it a condition of employment.”