Canceled cops fighting back, with lawsuits

As cities throughout the U.S. were being burned and looted last summer, Hopewell Township, New Jersey police Officer Sara Erwin commented on Black Lives Matter in a Facebook post: “They are terrorists. They hate me. They hate my uniform. They don’t care if I die.”

Another officer, Sgt. Mandy Gray, who weighed in on Facebook below Erwin’s comment was suspended for six months and demoted.

The officers have sued, accusing the Hopewell Township council of wrongful termination while pointed out they have stellar police records spanning 20 or so years and, as Chumley noted, “made the posts because, umm, they’re freaking American citizens endowed by their Creator with the right to speak their minds.”

The officers’ attorney, Frank Crivelli, said: “[The council’s actions] are disgraceful and cowardice.”

Both Erwin and Gray had “absolutely spotless records” with no internal affairs complaints prior to the Facebook post, Crivelli said.

“They’re trying to make an example out of them, and in my view, they’re pandering to the far Left,” Crivelli said of the township’s decision. 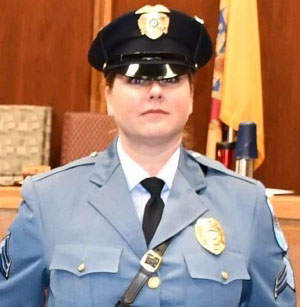 In the June 2020 Facebook post, Erwin wrote: “Last night as I left for work I had my two kids crying for me not to go to work. I don’t think I’ve ever felt the way I did last night. And then I watched people I know and others I care about going into harms way. I love my police family like my own. So when you share posts and things on Facebook I’d really appreciate if you’d THINK before doing so. I’ve seen so many black lives matter hashtags in these posts. Just to let you know — they are terrorists. They hate me. They hate my uniform. They don’t care if I die.”

Chumley noted: “For that — see ya. Years of honorable police service down the drain. Town council pinheads unanimously dismissed her, based on recommendations of an attorney. Now they’re refusing to comment.”

Americans, Chumley worte, “are, by and large, very large supporters of the 900,000 or so police officers who serve this nation. Minus the criminals, most in the country respect and support police, the first line of defense in a justice system based on law, based on order, not based on mob rule.”

Americans are “not taking kindly to the Left’s condemnation of police and simultaneous embrace, however light, of thugs. America’s reaching a tipping point with all this anti-fill-in-the-blank rhetoric against cops.”

According to FBI data, homicides increased by about 30 percent in 2020.

Chumley concluded: “The pendulum can only swing so far left — so far into chaos country — before it must swing the other way, back to sanity. America’s nearly there. More court cases from police against pinhead anti-policers should move the marker along nicely.”