The 1980 “Miracle on Ice,” in which the U.S. hockey team defeated a heavily favored Soviet squad, really “wasn’t a miracle at all,” according to a Sacramento Bee columnist.

Why? Because, on the 40th anniversary of one of the greatest upsets in sports history, some of the 1980 U.S. team members dared to show up at a Trump rally wearing Keep America Great hats, columnist Marcos Breton said in one of the latest examples of cancel culture. 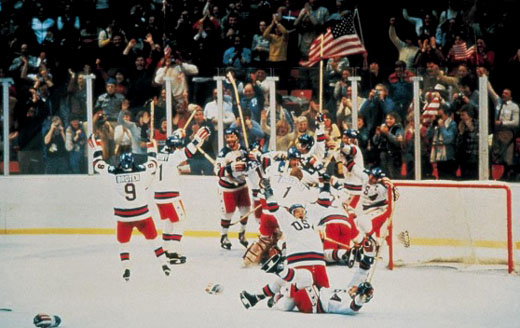 “It wasn’t a miracle at all,” Breton wrote. “It was a lucky win that spawned a myth that died when the red hats came out and the truth was revealed.”

Breton, who bills himself as the “proud son of Mexican immigrants,” claimed that the 1980 American victory once inspired him, but that all changed when the players showed up at President Donald Trump’s Feb. 21 rally in Las Vegas wearing the red hats that are so reviled by leftists.

“When I saw the image of the team as old white men wearing red hats next to Trump,” Breton wrote, “the spell was finally broken.”

“The ‘Miracle on Ice’ guys were perfect for adulation because they were all white, fresh-faced and eager to embrace the flag without question,” Breton wrote, adding that they were all from Minnesota and Boston, “places I had never been to.”

Author and columnist Lloyd Billingsley noted in a March 1 analysis for American Greatness that “Sacramento readers have come to know Marcos Breton as a predictable retailer of politically correct boilerplate, but most of his columns are about Breton his own self. His ‘Miracle on Ice’ put-down, for example, features more than 30 personal pronouns, heavy on ‘I’ and ‘me.’ ”

If the Soviet and American teams had played again in the 1980 Olympic tournament, according to Breton, the Soviets would have “wiped the ice” with Team USA.

Billingsley pointed out that Breton fails to mention that Team USA got far from “wiped” by a Czech team that featured the three Stastny brothers, future stars in the National Hockey League. The Americans defeated them 7-3. It was at the U.S.-Czech game that the “USA! USA!” chants first rang out in force, as sportscaster Al Michaels recalled in his book “You Can’t Make This Up”.

The U.S. team, average age 21, then faced the mighty Soviets, “who did not wipe the ice with them,” Billingsley noted.

The Americans were “skating faster than our players” and dominating play, said the Soviet play-by-play man, as noted in the ESPN documentary “Of Miracles and Men.” Buzz Schneider blasted a 50-foot slapshot past Vladislav Tretiak, perhaps the best goalie in the world, and Mark Johnson picked up a loose puck and scored in the final seconds of the first period to tie the game at two.

The Soviets had their chances, but defenseman Ken Morrow and goalie Jim Craig held them off. Mike Eruzione’s goal gave the U.S. a 4-3 lead they would not relinquish.

The Americans then faced Finland, a strong team with Jari Kurri, a future NHL star. The USA came from behind to win 4-2 and claim the gold.

Billingsley wrote: “In advance of the 1968 Olympics in Mexico City, students took to the streets to protest the Partido Revolucionario Institucional (PRI) dictatorship that had ruled Mexico since the 1920s. Mexican troops and police gunned down the students by the hundreds, the worst mass shooting in North American History and still covered up by Mexican politicians.

“On the 50th anniversary in 2018, Breton was pretty quiet about the massacre. In a similar style, it’s hard to find a column where he goes after the Mexican regime with the same force he deploys against the Americans who defeated the mighty Soviet Union and won Olympic gold way back in 1980. If any of those players consider Marcos Breton a gutless hack, it would be hard to blame them.”