Buffalo business owners to Cuomo’s covid police: ‘Get out — go get a warrant’

Buffalo business owners fed up with what they say are Democrat Gov. Andrew Cuomo’s arbitrary covid orders are taking a stand.

On Friday, a group of about 50 business owners and their supporters gathered inside an Orchard Park gym that has been shut down by Cuomo’s orders. 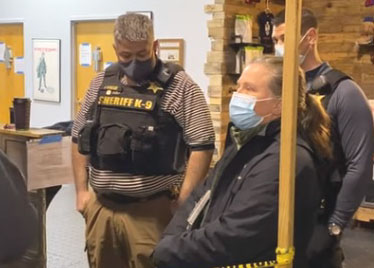 Robby Dinero, the owner of the Athletes Unleashed, said “it absolutely was a protest – inside my building,” The Buffalo News reported.

Video shows an Erie County health inspector accompanied by three sheriff’s deputies arriving about 20 minutes after the gathering began. The protest group blasted the authorities for entering the property without a warrant.

“Get out! Get out!” the group can be heard over and over as the health inspector and deputies exited the gym. Several people followed them out, holding up their cellphones to record the incident, the report said.

“I called this meeting together so we could protest the closing of small businesses, the handpicking of winners and losers,” Dinero told The Buffalo News.

As a protest, Dinero said, the gathering was protected by law. He pointed out that authorities didn’t try to stop Black Lives Matter protests over the summer. “It was no problem for people to come out then.”

Cuomo’s covid orders have also placed a limit on the number of people at home gatherings, including Thanksgiving.

Some New York law enforcement officials have declared they have no intention of counting guests at Thanksgiving dinners.

Among the sheriffs who won’t enforce the order are Erie County’s Tim Howard and Niagara County’s Michael J. Filicetti, who have said they refuse to break up Thanksgiving dinners even if they exceed the new statewide 10-person limit on gatherings.

“I have no plans to utilize my office’s resources or deputies to break up the great tradition of Thanksgiving dinner,” Howard said in a statement.