‘Brand Khomeini’ said damaged by photo of his great-grandson

The great-grandson of the famously ascetic leader of Iran’s 1979 revolution, Ayatollah Ruhollah Khomeini, has been forced to defend his seemingly lavish lifestyle. 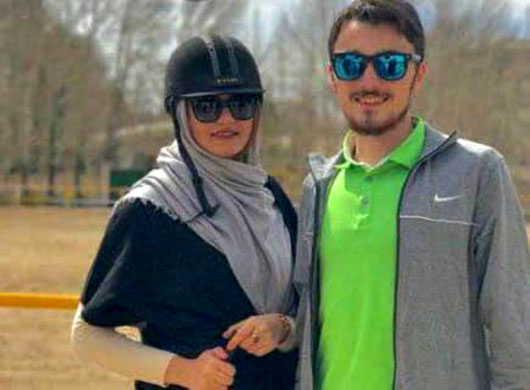 Ahmad Khomeini was responding to the circulation online of a photo showing the 21-year-old cleric at an equestrian club in fashionable sunglasses and a Nike sweatshirt standing next to a young woman in a riding helmet.

Persian-language social-media users were quick to condemn the young Khomeini’s “luxury horse-riding hobby” as far out of reach for most Iranians, who are enduring a collapse of the national currency amid the reimposition of tough U.S. sanctions to punish Tehran for its military and nuclear ambitions, alleged interference abroad, and rights and democracy record.

The editor in chief of the conservative Khorasan daily, Mohammad Said Ahadian, said the publication of the photo amid “today’s difficult conditions” damaged “the reputation of the Imam,” meaning Ruhollah Khomeini, who, he said, lived a simple life to demonstrate sympathy for the poor.

Ahadian called on Ahmad Khomeini’s father, Hassan Khomeini, who is close to reformist critics of Iran’s leadership, to denounce his son’s behavior or leave Khomeini’s legacy in someone else’s hands.

Ayatollah Khomeini, who died of heart failure in 1989, is still celebrated in Iran as the founder of the Islamic republic. His supporters refer to him as “the Imam.”

For his part, the head of the political desk of Moj news agency described Ahmad Khomeini as a “luxury agazadeh,” a term that Iranians routinely use to describe children of the elite who are believed to benefit significantly from privileged connections and family ties.

“Your behavior is not Khomeini-like. You have nothing in common with [Ayatollah] Khomeini, you only carry his name,” Amir Tohid Fazel said of Ahmad Khomeini on Twitter, adding, “The Imam that we knew would not be horseback riding at the height of people’s problems.”

‘They Attack My Father Through Me’

Ahmad Khomeini, who has more than 650,000 Instagram followers, reacted to the criticism by saying his financial situation was not “special” and that the photo, which he said was more than a year old, had been posted online from someone’s “private archive” and against that person’s will.

He suggested that those behind the controversy were targeting his father, Hassan Khomeini, who was prevented in 2016 by the hard-line Guardians Council from running for the Assembly of Experts. That body is tasked with electing the country’s supreme leader, initially Ruhollah Khomeini and now Ali Khamenei, who holds the ultimate political and religious power in postrevolution Iran.

“A media manager called on my father to give control of the Imam’s office to his friends, a wish they’ve apparently had for many years,” Khomeini said on Instagram. “My father’s enemies [attack me] in order to damage him. Therefore, this is not the first time, nor the last.”

Hassan Khomeini also said that he doesn’t own a horse and is not familiar with “such sports.”

The dashing Ahmad Khomeini and his father have been treated with suspicion by Iran’s conservative institutions seemingly due to their perceived sympathy for reformers, and were characterized in some places as part of an effort to provide “a facelift” for “Brand Khomeini.”

The cost of living has sharply increased in Iran amid a shortage of goods such as diapers and some medicine, according to Iranian media, with the situation expected to worsen as unilateral U.S. sanctions bite.

Late last year and early this year, thousands of Iranians protested rising prices and corruption by taking to the streets in around 80 cities before the authorities clamped down with mass arrests, an increased security presence, and the blocking of mobile devices. Since then, there have only been sporadic demonstrations, including strikes and other protests by teachers and factory workers complaining of low wages.

Others have vented anger and frustration on social media, including through criticism of Iran’s rich and powerful and their children.

The popularity among Iranians of social media has encouraged greater scrutiny of Khomeini’s heirs, including his 15 grandchildren, some of whom have been called out over their lifestyles or their political views, including ties to the pro-reform camp.

Earlier this year, Ahmad Khomeini was criticized for receiving what was seen as special treatment during his turban-placing ceremony, which took place following his graduation from a religious seminary. The ceremony was reportedly attended by a number of senior clerics.

There was also criticism last month when the Sharhvand daily reported Ahmad Khomeini’s “sudden” wedding on its front page, with some suggesting that the coverage reminded them of excesses during the shah era.

‘Brand Khomeini’ said damaged by photo of his great-grandson, WorldTribune.com