The narratives that wind up as the “news of the day” for Americans are heavily driven by just four Internet giants – Google, Facebook, Twitter and the Drudge Report.

According to Pew Research Center, 45 percent of Americans say they get some of their news from Facebook. 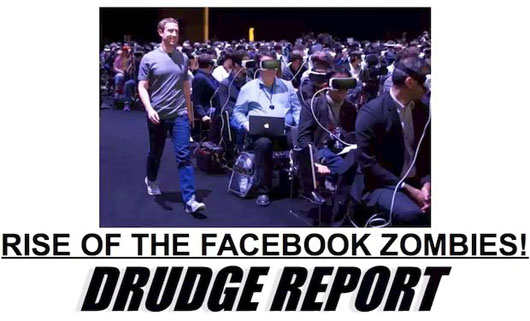 “That means these news consumers are increasingly influenced by digital behemoths whose methods for news referrals are mysterious and for which there is little accountability,” Jeffrey McCall, a professor of communication at DePauw University, wrote in a Nov. 30 op-ed for The Hill.

“One must wonder if news consumers are better informed on matters of substance or if their heads are filling up with mush.”

What ends up as news of importance “depends on the quality of the gatekeepers who determine what news topics get traction in the public mindset,” McCall wrote.

“Those media agenda setters used to be grizzled, professional journalists who understood news and public dialogue. Sure, power was centralized in the hands and heads of powerful news editors of the big television networks, wire service and major dailies. But, at least, they were journalists who had some conception of their civic duties as public surrogates and had the noses to sniff out news of substance.

“Today, the gatekeeping role of establishing the national news conversation falls increasingly on social media sites, search engines and news aggregator web sites. The backgrounds and motivations of the technical whiz kids should give the nation pause to consider the broader implications of this newfound influence.”

Several former Facebook workers confirmed in a published interview last year that they suppressed news on conservative political leaders. There is also evidence Facebook and Twitter both suppressed information on the WikiLeaks 2016 DNC documents. Twitter blocked a campaign ad earlier this fall by Republican Rep. Marsha Blackburn before later backing down.

A study by Robert Epstein of the American Institute for Behavioral Research found that Google searches on the 2016 presidential election routinely ranked pro-Clinton articles ahead of pro-Trump articles.

“Digital executives explain that search results and referrals are generated by computer algorithms that are not designed to promote any particular political cause,” McCall wrote. “That might well be true, but the algorithms are designed by people and managed by people. At the least, the public needs to be told more by these tech giants about how their content systems work.”

Meanwile, while the Left relies on Google, Facebook and Twitter, “the right has just one place to look for news: the Drudge Report, which gets about 30 million visitors each day,” McCall wrote. “That’s a fraction of the more than one billion who visit Facebook, but it’s still been enough to draw the ire of the mainstream media. A Washington Post story published in November accused Drudge of ‘regularly’ linking to ‘Russian propaganda,’ by which it meant sites such as Russia Today and InfoWars. (Drudge ironically received no thanks for the hundreds or perhaps thousands of times the site has linked to stories from the Washington Post.)”

McCall concluded: “The news world has changed one set of gatekeepers (legacy media) for another set (digital search engines and social media). Whatever else can be said of that change, it’s safe to say times were simpler when consumers only relied on Walter Cronkite.”