Bloodbath: Only winner in GOP struggle over nomination is Obama

The White House is popping champagne corks. President Obama got what he wanted from the Iowa caucus: a fractured Republican Party racked by bitter internal infighting. This is the real news of the Iowa results. Unless the GOP can unify around a single candidate soon, the primary threatens to get bogged down into a protracted conflict between its leading rivals.

This will leave the eventual winner — whoever that person is — politically weakened and financially depleted. No wonder the Democrats and their media allies can’t hide their glee at the Iowa results.

The two obvious winners were Mitt Romney and Rick Santorum. Mr. Romney, the former Massachusetts governor, was behind in Iowa several weeks ago, facing a powerful surge from former House Speaker Newt Gingrich. Mr. Romney won the vote (barely), proving he can do well in a socially conservative state. He is now the clear front-runner. If he should also capture the New Hampshire primary, especially in a landslide, then Mr. Romney will likely emerge as the eventual GOP presidential nominee. 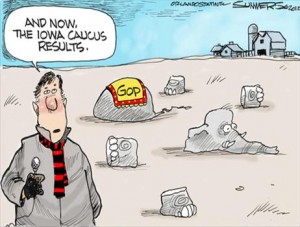 Mr. Santorum, a former U.S. senator from Pennsylvania, has become the dark horse of the 2012 campaign. He emerged out of nowhere to win 25 percent of the vote — a stunning result. His strong finish shows that cultural conservatism combined with dogged campaigning still resonates with voters — particularly in rural, heavily evangelical states such as Iowa. Yet there was another major reason for his success: He was the last man standing. Every previous alternative to Mr. Romney — Rep. Michele Bachmann of Minnesota, Texas Gov. Rick Perry, businessman Herman Cain and Mr. Gingrich — saw their support rise and then collapse following withering pressure. Tea Party conservatives do not like Mr. Romney; they view him as too establishment, too moderate and too liberal. They are searching for a champion. The only person left is Mr. Santorum. Ultimately, he has been the beneficiary of good fortune. He peaked at the right moment.

He will now face the glaring public spotlight — and with it, inevitable conservative disappointment. As a Catholic Tory, I agree with Mr. Santorum on many key issues — abortion, homosexual marriage, contraception, euthanasia and defense of the family as the basic institution of society. He is a flinty conservative, who has repeatedly stood for the culture of life. Yet, he has numerous weaknesses. Mr. Santorum is a big-government conservative in the mold of ex-President George W. Bush. As a senator, he voted for countless earmarks, including the notorious “Bridge to Nowhere.” In fact, he hardly ever met a pork-barrel project he didn’t like.

He supported No Child Left Behind. He strongly backed the Bush prescription-drug benefit, at the time the greatest expansion of the welfare state since the Great Society. In 2004, he endorsed the rabidly pro-abortion, liberal Sen. Arlen Specter against conservative insurgent Patrick J. Toomey during the Pennsylvania Republican Senate primary — a huge blow to anti-Washington conservatives. Moreover, Mr. Santorum was crushed in a landslide in the 2006 election by Robert P. Casey Jr. This begs the question: If he couldn’t even hold his own Senate seat, then how is he supposed to defeat Mr. Obama? The answer is simple and obvious: He can’t.

The Iowa results have exposed cleavages in the GOP. It is essentially now split along three lines. Mr. Romney heads the party’s establishment; Texas Rep. Ron Paul embodies its libertarian wing; and the Santorum-Gingrich-Perry axis represents disaffected conservatives. Mr. Paul is well-entrenched, but his base is too narrow to break out and win the nomination — especially after his gaffe when he said Iran’s mullahs are justified in acquiring the bomb. All he can do now is play the role of spoiler. This realistically leaves only two candidates: Mr. Romney and Mr. Gingrich. They have turned their big guns on one another.

Mr. Romney’s super PACs spent millions reducing Mr. Gingrich’s campaign to political rubble (the Paul team also launched a barrage of negative ads). Bitter and angry at his poor showing, Mr. Gingrich is now waging a scorched-earth strategy. He is calling Mr. Romney “a liar,” and saying that the former Massachusetts governor “would buy the White House if he could.” The GOP primary is slowly turning into a circular firing squad, unleashing a bloodbath that only helps one man: Mr. Obama.

Whoever wins the nomination will emerge bloodied, battered and weakened. His credibility will be badly damaged, leaving Mr. Obama in a strong position to win re-election. In fact, all the Democrats need to do is run ads in the general campaign showing what the Republican challengers have said about their own eventual nominee. The flying insults are providing ammunition for the Democratic attack machine.

The liberal media class laid a trap for the GOP. The sheer number of televised debates and the nature of the drawn-out process — the Republican primary effectively began a year ago — have enabled the media to pit the GOP candidates against each other, constantly encouraging personal attacks and ideological friction. Foolishly, the Republicans took the bait.

In fact, if one leaves the insults aside, it is remarkable how much the Republican contenders agree with one another: repealing Obamacare and Dodd-Frank; cutting corporate, capital gains and income taxes; rolling back big deficits, big spending and big debt; reviving the private economy and market-driven growth; opposing abortion and homosexual marriage; securing the porous southern border; returning power back to the states; and ending Mr. Obama’s drive to create an entitlement state. In short, they will dismantle Obamaism root and branch.

The majority of the electorate agrees with this anti-socialist, pro-growth and traditionalist agenda. Yet this potent message is being lost in the circus show that is now the Republican primary process. The GOP is on the verge of snatching defeat from the jaws of victory. They should stop demonizing each other and focus on the real enemy — Mr. Obama. If not, then America is doomed.

Bloodbath: Only winner in GOP struggle over nomination is Obama added by Editor One on January 6, 2012
View all posts by Editor One →