America must “wake up from wokeness,” historian and columnist Victor Davis Hanson declared.

George Orwell “would say of these cultural Marxists that they grab power in the present to reinvent the past in order to control our futures,” Hanson wrote for American Greatness on Aug. 11. 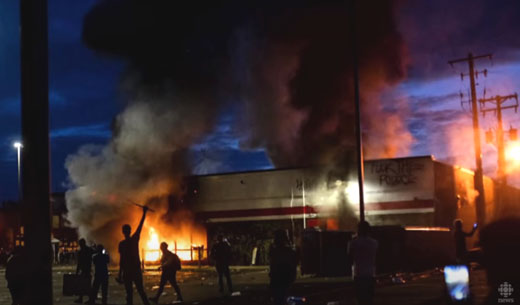 “For the first time in their lives, all Americans of all classes and races are starting to fear a self-created apocalypse that threatens their families’ safety and the American way of life,” Hanson wrote.

“Civilizational collapse” is happening on many fronts, Hanson warned.

One of them is Team Biden’s open border policies, in which 2 million migrants may enter via the U.S. southern border the current fiscal year.

“There is zero effort to stop them,” Hanson noted. “Officials daily hector Americans to get vaccinated and tested for Covid. But they are mute about illegal entrants, some of them infected with the virus.”

Joe Biden “has also conceded that his hold on housing evictions deliberately defied a Supreme Court ruling. He added that he probably did not have the legal authority to ignore the court, but did not really care,” Hanson wrote. “As in the case of demolishing immigration law, the president seems either unaware or proud that he is insidiously dismantling the Constitution.”

Then there is the assault on capitalism.

“In a rebounding economy amid record debt, the government is still sending workers unemployment benefits that are more remunerative than the paychecks they would earn if employed,” Hanson noted. “Such insanity means not only that labor-short employers cannot provide goods and services to American consumers. The new ethos also institutionalizes the pernicious idea that it is smarter to stay home and idle than to get a job and be productive.”

Next up is Bidenflation. “The administration is printing trillions of new dollars that do not reflect commensurate gains in productivity or population,” Hanson wrote. “Soaring prices are a direct result of incentivizing the unemployed not to work, while discouraging manufacturers and producers of food, gas, oil, timber, mineral, and metals.”

Hanson also pointed to surging crime that “likewise is not accidental. It is the logical result of deliberate nihilistic policies of releasing thousands of criminals from jails and prisons, defunding and defaming the police, and empowering woke mayors and prosecutors to contextualize crime as the fault of society, not of the criminal. In response, millions of Americans now simply avoid the mayhem and chaos of blue-state big cities.”

“No one knows whether our laws even still exist — or at least exist haphazardly depending on who breaks them. Thieves steal with brazen impunity. The police predicate arresting suspects on criteria that have nothing to do with breaking the law.”

Hanson concluded: “What started out as elite woke nonsense now warps everyone’s daily life. If we don’t wake up from wokeness, we will continue on our sure trajectory to self-inflicted, systemic paralysis — followed by civilizational collapse.”

Apocalypse, USA: Hanson warns of civilizational collapse if we don’t ‘wake up from wokeness’, WorldTribune.com