A trio of media moguls with a combined net worth of $222 billion, saying they can’t compete with Google in an “economically squeezed news industry,” are asking for the assistance of Congress in their fight with the Internet giant.

The newspaper owners who are “pleading poverty” are The Washington Post’s Jeff Bezos (worth $83.9 billion, according to the Bloomberg Billionaire’s Index), The New York Times’ Carlos Slim (worth $61.1 billion), and the Buffalo News’ Warren Buffett ($76.9 billion). 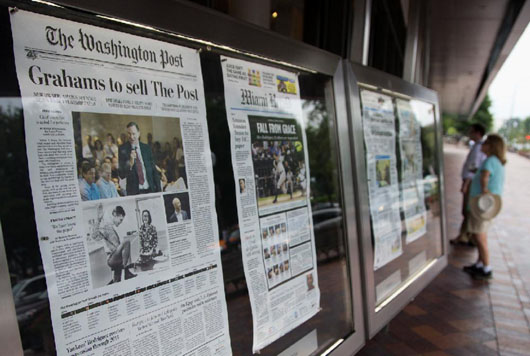 They have asked Congress for help in their negotiations with Google, controlled by Sergey Brin ($45.6 billion) and Larry Page ($46.8 billion).

The Times, in a column sympathetic to the effort, likened the newspaper owners to “serfs.”

“The idea that Congress needs to roll to the rescue of ‘serfs’ like Messrs. Bezos, Buffett, and Slim to bail them out of bad investments just doesn’t pass the laugh test,” Ira Stoll wrote for The New York Sun on July 10.

“In respect of the Times, it’s particularly comical, because, as an editorial matter, the paper generally favors stricter antitrust enforcement. The newspaper that less than two years ago was editorializing that Congress ‘should also study whether there are ways to strengthen the antitrust laws,’ now is backing the move for what its own columnist describes as ‘an anticompetitive safe haven,’ ‘a limited antitrust exemption.’ ”

In a Wall Street Journal op-ed, David Chavern, president and chief executive of the News Media Alliance, whose board has representatives of Bezos-Slim- and Buffett-backed papers, said that “if you want a free news model, you will get news…But it will be garbage news.”

Stoll noted that, “in this past election, the prediction model of the expensive, paid New York Times was just as wrong as that of the free Huffington Post. Nate Silver had a better prediction over at ESPN’s free website.

“Even if you buy the questionable idea that more expensive news automatically equals better news, it’s a further, and even more tenuous, logical leap from that idea to the notion that Congress ought to interpose itself on one side of a set of business negotiations to make it easier for the publishers to make their news more expensive to consumers, or their ads more expensive to advertisers.”

Stoll continued: “If publishers want to permit competing suppliers to negotiate prices and terms on a cooperative basis, then let them support changing the law to allow it in every industry, without special treatment for journalistic enterprises.”

Google-Facebook, while taking advertising and subscription revenue dollars “out of publisher pockets,” has been “a huge boon to marketers and to readers,” Stoll wrote.

“Advertisers can now reach targets more efficiently at a fraction of what they used to pay for print ads, and readers can now get news from a variety of sites and editors and journalists, from Matt Drudge to Mike Allen to Glenn Reynolds, rather than having to rely on the judgment of their one hometown newspaper editor.

“Not even Congress has the power to turn back that clock to the old days. Nor would anyone with any sense want it to, other than someone lucky (or unlucky) enough to have inherited a newspaper, or foolish enough to have overpaid for one.”