Updated March 18: Only alternative media reported on a video of Facebook’s chief of global planning saying the company’s voter registration drive, which signed up over 4.5 million people, swung the 2020 election to Joe Biden. 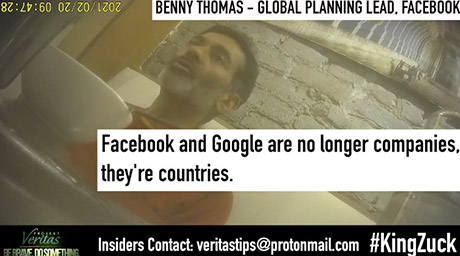 In a new video released by Project Veritas, Benny Thomas said Facebook has become too powerful and “the single biggest thing is this company needs to be broken up.”

One newspaper has been paying attention. WorldTribune.com site administrators have reported the sharp suppression of the spread of content since early September 2020. They said Facebook has issued no notifications or any other communications to WorldTribune.com and are using “stealth” processes which may have “First Amendment ramifications”.

Readers, who have long reported being blocked or knocked off Facebook when sharing WorldTribune.com articles, sent the screenshots below.

Facebook officials were asked Tuesday to explain the basis for their actions to prevent the sharing of WorldTribune.com editorial content but have not responded.

Government action is not only warranted but necessary to limit the damage the Big Tech giant does to society, Thomas said.

Thomas said he was concerned by the lack of public awareness around Facebook’s excessive power.

He specifically mentioned the influence Facebook CEO Mark Zuckerberg exerts over the company.

“No king in the history of the world has been the ruler of two billion people, but Mark Zuckerberg is — and he’s 36. That’s too much for a 36-year-old. You should not have power over two billion people. I just think that’s wrong,” he said.

As for the 2020 election, Thomas said Facebook was able to single-handedly turn the tide in Biden’s favor with its voter registration drive, something that can only be done by “a company that has the sheer scale and reach of Facebook.”

“We set ourselves a goal of registering four million new people and we went over that target, we did 4.5,” Thomas said.

Reporter: “Yeah. I’m pretty sure he [Biden] won that way. What do you think?”

Thomas: “Exactly, I think so too.”

“He [Zuckerberg] owns a controlling stake in the company. So, you can’t do it the usual way that you do it in corporate, which is the board can just fire you, right?

Thomas said he “would break up Facebook, which means I would make less money probably — but I don’t care. Like that’s what needs to be done. Instagram, Facebook Messenger, Oculus, WhatsApp — they all need to be separate companies. It’s too much power when they’re all one together.”

Thomas said that Facebook’s algorithms are subject to human biases and stressed the importance of fixing the company’s algorithms and AI [Artificial Intelligence] sooner rather than later.