Kyle Rittenhouse on Friday was acquitted on all charges related to the shooting of three men during rioting in Kenosha, Wisconsin on Aug. 25, 2020.

Not guilty, a jury of 12 announced in the face of threats to their safety, honor and livelihoods. 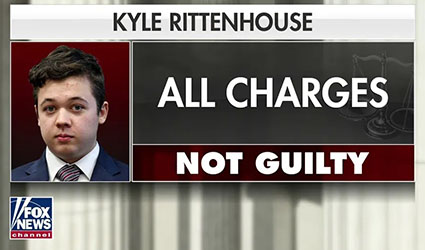 Guilty, countered Big Media along with a relatively small subset of humanity that presumes to know what is best for all humanity.

These self-annointed elites didn’t need to hear the verdict from a jury that declined to conform to what has been exposed as an overwhelming narrative of lies.

Journalist Glenn Greenwald told Tucker Carlson on the weekend that many friends around the world believe, based on media repors, that the men killed in the incident were black. They were white.

Before and after the decision was handed down by the jury, the corrupt U.S. media convicted Rittenhouse of being a white supremacist vigilante murderer.

• “Meet the Press” personality Chuck Todd: “The next time there’s a protest of some sort, and it may get politicized, that gun owners, with a certain ideology may feel incentivized now, may feel even emboldened.”

• MSNBC’s Joe Scarborough had claimed Rittenhouse fired “60 rounds” (Note: It’s difficult to fire 60 rounds when you have only 30 rounds loaded.)

There is this thing called evidence. In the Rittenhouse case, the jury found that evidence, in the form of video of the shootings and eyewitness testimony, showed the then-17 year old acted in self defense when he shot and killed Joseph Rosenbaum and Anthony Huber and shot and wounded Gage Grosskreutz.

Every single witness who testified this week at the trial confirmed exactly what happened. And here are the facts of it: A convicted child rapist called Joseph Rosenbaum was released from a mental hospital and then went directly to join the mob that was burning downtown Kenosha.

Some Republicans have called on Joe Biden to apologize for characterizing Rittenhouse as a “white supremacist.”

Don’t count on it. In fact, the Congressional Black Caucus made sure of that, stating: “It is unconscionable our justice system would allow an armed vigilante — who traveled to Kenosha, Wisconsin and killed Joseph Rosenbaum, Anthony Huber, and wounded Gaige Grosskreutz — to go free.”

No racial component existed in the Rittenhouse case. He’s white. So were Rosenbaum and Huber and so is Grosskreutz. The imagination does not stretch so far as to proclaim that Rosenbaum, Huber and Grosskreutz were “peaceful protesters.” Anyone actually following the trial knows this. Apparently, The Independent wasn’t one of them.

A depressing example of how the British media misreported the Kyle Rittenhouse trial as badly as the US media. This is the @Independent‘s report on the verdict.

The American Civil Liberties Union said in a statement: “Despite Kyle Rittenhouse’s conscious decision to travel across state lines and injure one person and take the lives of two people protesting the shooting of Jacob Blake by police, he was not held responsible for his actions.”

This backed the narrative pushed by the Left that Rittenhouse had carried the gun across state lines, which was false.

Second Amendment Foundation founder Alan M. Gottlieb noted: “While the ACLU should have been complaining about the conduct of prosecutors in the Rittenhouse case, the organization instead is calling Rittenhouse a deliberate killer, perpetuating the myth that he deliberately crossed state lines to kill people. It is shocking for the ACLU, which has a long record of defending the rights of individuals against government prosecution to make such an outrageous statement.”

Gottlieb noted that Rittenhouse “was acquitted by a jury of seven women and five men for defending himself against multiple attackers in the middle of a riot. By being tried in court, he essentially was being held responsible for his actions, which the jury’s verdict clearly indicates were justified under the circumstances.”

As for the First Amendment, the Left threw that one out the window last year.

Yet, Google allows the sale of shirts related to such lovers of democracy as Joseph Stalin and Mao Zedong.

Meanwhile, GiveSendGo, a free Christian crowdfunding site, announced on Sunday that it is allowing fundraising for Rittenhouse’s legal defense on its platform. GiveSendGo Co-founder Jacob Wells said the decision was made because he believes that every American has a right to a fair trial and is innocent until proven guilty.

“Without GiveSendGo stepping in, this young man wouldn’t have been afforded that right to a fair trial,” Wells said. “Rittenhouse has now been declared innocent in a court of law and every platform that canceled him should be ashamed for not standing with the side of justice.”

Rittenhouse attempted to raise funds for his legal defense on GoFundMe last year, but was unsuccessful due to his campaign being shut down by the crowdfunding site.

Heather Wilson, the co-founder of GiveSendGo, said Rittenhouse was in a hopeless situation before GiveSendGo stepped in and provided a platform for him to raise funds for his legal defense.

“What would have happened to Kyle had GiveSendGo not been there?” Wilson said. “GiveSendGo exists to provide hope to the hopeless through crowdfunding and that’s exactly what happened with Kyle Rittenhouse. In the end, Kyle was found innocent and we had his back, even when no one else did.”