How Orwellian is this? From The Guardian, a UK newspaper that is heavily funded by Bill Gates, on a new research study in Wales:

Refusal or reluctance to have a Covid-19 vaccine may be linked to traumatic events in childhood, such as parents separating, neglect, or physical, verbal and sexual abuse, new research suggests.

Those who suffer in childhood are also least likely to trust official [National Health Service] coronavirus information, follow the rules of restrictions or wear masks during the pandemic, public health experts found. 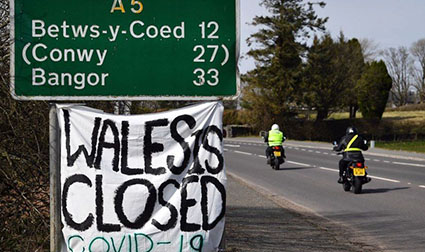 Remember: This is a government-funded study:

Health experts and policymakers are urgently trying to figure out why. Now the findings of a new study funded by Public Health Wales and published in the journal BMJ Open suggests that Covid-19 vaccine hesitancy may be linked to childhood trauma.

Six Bangor University researchers are listed as authors of the study. Three of them are also affiliated with the government Public Health Wales “World Health Organization Collaborating Centre on Investment for Health and Well-being.”

Mark Bellis is the first author listed. He is the “Executive Director of Policy and International Health/Director” for the globalist health center. His Public Health Wales bio states:

Internationally, Mark is a member of the World Health Organization (WHO) global expert advisory panel on violence prevention, the UK Focal Point to the WHO for Injury and Violence Prevention and has worked as an advisor to a range of other UN agencies including United Nations Development Programme, United Nations Office on Drugs and Crime and United Nations International Children’s Emergency Fund.

Now would be a good time to point out that WHO operates as a wing of the Bill & Melinda Gates Foundation. The global health titan is so deeply in the pockets of Gates that U.S. News & World Report noted in 2020 that:

The Gates Foundation has been a key donor to the WHO over the past decade, accounting for as much as 13% of the group’s budget for the 2016-17 period. In February, the foundation pledged $100 million to fight the coronavirus pandemic, and it upped that to $250 million in April after an order from [President] Trump brought U.S. government funding to a halt.

The Gates Foundation has financed WHO to the tune of over $150 million in the past four months alone.

One could have a field day picking through this abjectly Bolshevik document. Those who refuse to obey the Jab Social Regime are other-ized in the cruelest of ways. They are literally declared mentally damaged beings.

We’re not interested in highlighting the flimsy methodology of this tripe. For it is clearly not being done in good faith. The only worthwhile takeaway is what this paper says about those responsible for producing it.

Here’s how much the World Health Organization, the professional university class and the government of Wales hates its own citizens.

The researchers begin by stressing the urgent need to identify those who won’t go along with medical establishment social curb regimens:

In many countries, the control of COVID-19 has relied on public acceptance of, and compliance with, restrictions on travel, work, socialising and public behaviour….

[D]espite some discussion on mandatory vaccination, the success of this emergent COVID-19 control measure also relies on individuals having confidence in and complying with health messaging. Consequently, it is critical for COVID-19 control to understand what factors differentiate individuals who may or may not trust health information, adhere to behavioural advice or accept offers of vaccination. Such understanding can inform the development and targeting of future measures to maximise behavioural compliance and vaccine uptake in different population groups.

The door has thus been opened for the other-ing process:

Here, we examine relationships between a history of childhood adversity and current levels of trust in health systems information, support for and compliance with COVID-19 control restrictions, and intention to be COVID-19 vaccinated. We hypothesise that, independent of sociodemographics, exposure to more [Adverse Childhood Experiences] will be associated with less trust in health systems, lower support for governmental restrictions intended to control COVID-19 transmission and higher vaccination rejection rates (termed here vaccine hesitancy).

Amazingly, the study confirms the hypothesis. How about that?

Nine ACE types before the age of 18 years (physical, verbal and sexual abuse; parental separation; exposure to domestic violence; and living with a household member with mental illness, alcohol abuse, drug abuse or who was incarcerated) were measured….

Individuals with higher ACE counts were more likely to have low trust in NHS COVID-19 information along with individuals from more deprived quintiles of residence.

The desired results are now official: If you question government medical health officials, you are not normal. You are a mentally impaired individual:

Just under 1 in 10 people reported feeling unfairly restricted [by coronavirus government social curbs]. This rose with ACE count, with the proportion among those with four or more ACEs being more than twice as high as in those with none.

You don’t want to demand that every human being who crosses your path remain six feet away from you at all times? It is now scientifically proven: You are a trauma-scarred lunatic:

Supporting the removal of social distancing increased more than threefold from those with no ACEs to those with four or more.

It goes for masks too:

Support for ending mandatory face coverings increased fourfold between those with no ACEs and those with four or more ACEs.

And then, of course, comes the Jab itself:

Around 1 in 13 individuals surveyed reported vaccine hesitancy. However, this increased around fourfold between those with no ACEs and those with four or more.

From there, the official “Conclusions” are easy to foretell. These damaged “others” pose a dire public health threat:

Coping with trauma resulting from at least one current or previous ACE is common in the populations of many countries with proportions having experienced multiple ACEs frequently reaching ten percent or more of the population. Such individuals are already known to have greater health risks across the life-course. Results here suggest such individuals may have more difficulty with compliance with public health control measures and consequently require additional support.

Menace identified: Those branded with the starkly labeled “Adverse Childhood Experiences” are “at higher risks of infection and posing a potential transmission risk to others.”

Our Elites are coming out and saying it: There are no issues up for debate here. If you will not obey them, you are not to be regarded as one who holds a differing view. Rather, you will be marked as a mentally disturbed individual who endangers the healthy body of the community at large.