During what they called a “Family Town Hall on COVD-19,” Joe and Jill Biden talked about how they have six grandchildren, with Joe saying that “every single day I either talk to them or we text.” 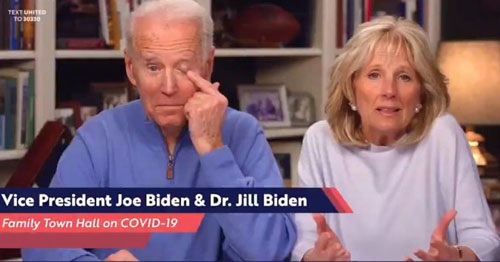 Observers noted that the Bidens actually have seven grandchildren, but were not acknowledging the out-of-wedlock child their son Hunter had with an exotic dancer.

Sara Gonzalez, host of The News and Why It Matters on BlazeTV, tweeted: “Here is Jill Biden telling the world that she and Joe only have SIX grandchildren.

They have SEVEN, including Hunter’s out-of-wedlock love child. What kind of GRANDMOTHER excludes an innocent grandchild because of her son’s poor decisions? Jill Biden, that’s who. Despicable.”

Joe Biden’s deceased son Beau had two children. Hunter Biden had three children with his first wife, Katherine Buhle. Hunter also has a new baby with his current wife Melissa Cohen, and one baby born in 2018 to Lunden Alexis Roberts — an exotic dancer that he had an affair with.

The Washington Free Beacon reports, “[Hunter] Biden and Roberts reached a settlement in March 2020 requiring Biden to make monthly child-support payments beginning in April and reimburse Roberts’s legal fees. As far as the law and science are concerned, Hunter Biden has five children, which means that Joe Biden has seven grandchildren.”

The Beacon’s report noted that, in November 2019, Hunter Biden was found — by science — to be the father of a child born to Roberts in August 2018. A court-ordered DNA test determined “with scientific certainty” that Hunter was the child’s father, despite his repeated denials that he ever had a sexual relationship with Roberts.