Joe Biden’s executive orders on climate change are not only killing thousands of American jobs but are also likely to damage the environment more than healing it, lawmakers and energy industry experts say.

“Concerns are mounting that his executive actions will do nothing to reduce emissions while threatening to wreak enormous environmental damage,” Valerie Richardson noted in a Feb. 9 report for The Washington Times. 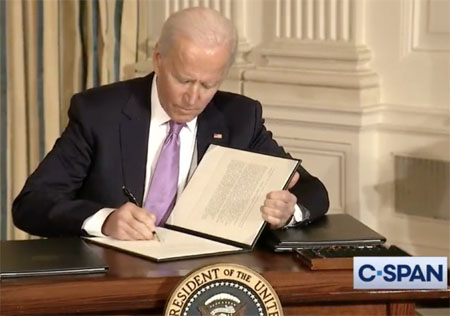 The Biden team’s move to cancel the Keystone XL pipeline and suspend fossil fuel leasing on federal lands “have been criticized as largely symbolic from a climate perspective, given that global oil demand is expected to rise and any drop in U.S. production would be offset by foreign competitors such as Russia and Saudi Arabia,” Richardson noted.

Manhattan Institute senior fellow Mark Mills said Biden’s moratorium on oil leases would be “utterly ineffective” in combating climate change, given that it “will not reduce the consumption of oil or the emissions of carbon dioxide from the combustion of petroleum.”

And Team Biden has not even gotten to its ultimate climate goal, which is net-zero U.S. carbon emissions by 2050. To do that, fossil fuels would be replaced in power plants with wind and solar energy and all vehicles would be electric.

The amount of mining necessary to produce the solar panels, wind turbines and batteries needed for such a transition would require an “unprecedented scale of mined, sometimes toxic, resources from the earth,” Scott Tinker, director of the bureau of economic geology at the University of Texas at Austin, told The Washington Times.

Canceling the Keystone XL pipeline not only eliminated thousands of high-paying jobs, but does nothing to help the environment, analysts say, because the crude oil which would be transported via the pipeline will now be transported via rail or truck which produce higher emissions than pipelines, said James Taylor, president of the free market Heartland Institute.

Sen. Bill Cassidy, Louisiana Republican, said last week at a Senate Energy and Natural Resources Committee hearing: “When we potentially don’t develop our oil and gas, we will shift production of the oil and gas to other countries with lower environmental standards, which is to say that per unit of oil or gas produced, there will be more greenhouse gases emitted into the atmosphere.”

Even Biden global climate czar John Kerry acknowledged that meeting the U.S. targets under the Paris accord will have little impact on global emissions.

“[Mr. Biden] also knows that Paris alone is not enough — not when almost 90% of all of the planet’s emissions, global emissions — come from outside of U.S. borders,” Kerry said. “We could go to zero tomorrow, and the problem isn’t solved.”

The Biden team’s desired transition to solar and wind will result in heightened demand for rare earth minerals, the mining of which is controlled largely by China, but the Manhattan Institute’s Mills said he also expects demand for other metals such as nickel to increase exponentially.

“It’s going to have to come from somewhere. It’ll have environmental impacts. I think we will probably not mine it here,” Mills said. “I don’t see any evidence that the U.S. is embracing the opening of new mines in a time frame that would be meaningful, so it’ll come from Russia’s Norilsk mine in the Arctic.”

Republicans note that U.S. emissions have been declining for 20 years, thanks in large part to natural gas replacing coal in electricity generation. The transition was made fracking, which Biden seeks to limit with his leasing ban.

“These actions could actually move us away from our climate ambitions,” said Sen. Steve Daines, Montana Republican.

Richardson noted that “U.S. emissions represent 14 percent of the global total, down in the two decades from 25 percent, while emissions in China, the world’s largest producer of solar panels and wind turbines, have increased to 30 percent as the country continues to build coal-fired plants.”

Daines said that “any ban on fracking is also expected to drastically increase emissions. I’m a chemical engineer by degree. I like to look at the numbers. The science tells us that these radical moves to the left are actually going to increase CO2, not decrease CO2.”

An OnLocation report for the American Petroleum Institute released in September found that a moratorium on federal oil and gas leasing could result in a 5.5 percent increase in emissions by 2030 by raising the price of natural gas, prompting power plants to return to coal.

Biden also has called for replacing the federal vehicle fleet with electric cars. Most battery materials needed for electric vehicles are processed in China, where two-thirds of the grid is fueled by coal.

“That means that the energy to make battery materials emits carbon dioxide,” said Mills. “Just as a calibration point, making a battery and the materials for it that can store the amount of energy equal to a barrel of oil requires consuming about 100 barrels of oil equivalent of energy.”