Biden staffer may have been ‘at fault’ in campaign bus highway incident in Texas, police say

Local police said that a staffer for Joe Biden may be “at fault” in a minor collision that occurred during an incident where Trump supporters escorted a Biden/Harris campaign bus out of town in Hays County, Texas. 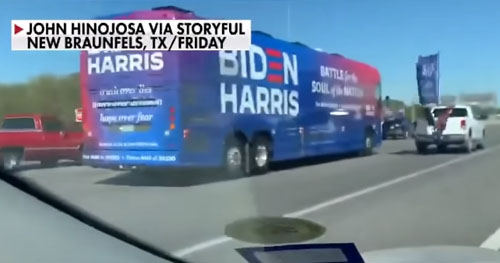 The incident occurred on I-35 in Hays County and involved a Biden staffer’s white SUV making contact with a Trump supporter’s black truck, according to the San Marcos Police Department (SMPD).

The SMPD said it researched the collision and watched footage of the incident online.

“The at-fault vehicle may be the white SUV and the victim appears to be the black truck,” the police department said in a statement.

The SMPD also said the Biden bus requested a police escort, but due to traffic police were not able to reach the campaign bus before it exited the jurisdiction.

Leftists paint a much different picture of the incident than police.

“It was on an interstate highway in Texas, and a bunch of Trump trucks, pickup trucks … tried to run it off the road, they stopped in front of it,” Biden said on Sunday.

Neither Joe Biden nor Kamala Harris were on the bus, as some tweets claimed

President Donald Trump said Sunday of the incident, “You see the way our people — they were protecting his bus yesterday because they’re nice.”

West added: “Three Trump supporters have been executed, one in Portland, one in Denver, and one Milwaukee. A leftist mob attempted to storm the house of the McCloskeys, threatened to burn their house down, rape Mrs. McCloskey, and then kill them both.”

“Where is the liberal corporate media’s concern about that real violence? Additionally, none of what your question implies is accurate.

“Prepare to lose … stop bothering me,” West said in a statement.

Biden staffer may have been ‘at fault’ in campaign bus highway incident in Texas, police say