The guy who vowed to “shut down” the Covid virus once and for all has opened the door for the “Covid forever” crowd.

Joe Biden has approved handing over $137 million in U.S. taxpayer dollars to a German firm to build a factory in Wisconsin which will produce coronavirus testing kits. 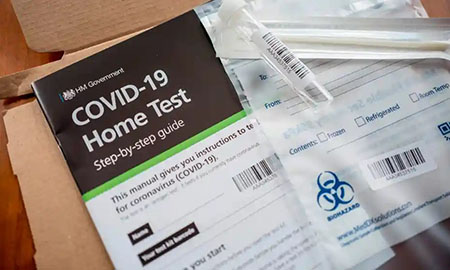 The deal does nothing to fix the immediate problem of a lack of testing kits which has led to massive wait times at testing locations across the country.

The new facility won’t be completed until late 2024 at the earliest. Team Biden believes that Covid testing will still be needed in 2025.

MilliporeSigma, a brand formed by Germany’s Merck KGaA, will build the factory in Sheboygan, Wisconsin, the U.S. Department of Defense announced on Wednesday.

Since he already broke his promise to shut down the virus, Americans are demanding Biden at least fulfill his vow to have 500 million Covid at-home tests available after announcing Wednesday that the contracts for the order won’t be finished until “late next week.”

The United States on Wednesday hit a record of nearly 500,000 coronavirus cases reported – the most any country has ever reported.

“We’re never going to stop counting, tests – but we’re looking forward, as everyone I think feels is appropriate, that ultimately we’re going to have to live with something that will not be eradicated and very likely would not be eliminated,” Fauci said.

“If your plans are to go to a 40 to 50-person New Year’s Eve party with all the bells and whistles and everybody hugging and kissing,” Fauci said during the White House Covid-19 Response Team briefing, “I would strongly recommend that this year, we do not do that.”

At least 1,071 flights were canceled and 1,564 delayed on Thursday, according to tracking website FlightAware.

Some passengers vented their fury on social media saying they were forced to wait on the tarmac for hours before being told to deplane. Others said the wait time at call centers was as long as 102 minutes as phone lines jammed.