Biden sending another $1.7 billion of U.S. taxpayer money to Ukraine

Another $1.7 billion of U.S. taxpayer money is being sent by Team Biden to Ukraine, this time to pay the salaries of Ukrainian health care workers and provide other essential services, reports say. 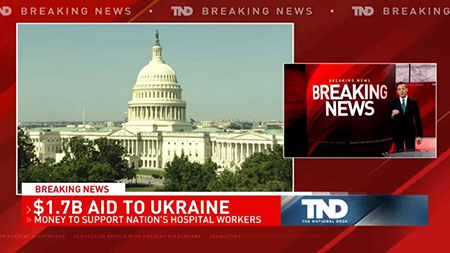 The money pledged on Tuesday from the U.S. Agency for International Development (USAID), the Treasury Department and the World Bank is meant to alleviate the acute budget deficit caused by Russian President Vladimir Putin’s “brutal war of aggression,” USAID said in a statement.

The $1.7 billion is on top of the $54 billion of aid to Ukraine already authorized by Team Biden.

Kyiv previously said it needs around $5 billion per month to keep the Ukrainian economy afloat.

President Volodymyr Zelensky insisted on Monday that the reconstruction of Ukraine is the “common task of the entire democratic world.” Zelensky’s administration laid out a $750 billion recovery plan once the war is over.

British Foreign Secretary Liz Truss said such a recovery would require a sort of “Marshall Plan” for Ukraine to help it rebuild.

Viktor Liashko, Ukraine’s minister of health, said the additional $1.7 billion from the U.S. “is not just yet another financial support; it is an investment that makes us a step closer to victory.”

Translation, they will be asking for more, and Biden will likely give it to them.

Joe Biden has said that he won’t stop sending U.S. taxpayer money to Ukraine. “We are going to support Ukraine as long as it takes,” Biden said recently at a press conference during the NATO summit in Madrid.

Biden sending another $1.7 billion of U.S. taxpayer money to Ukraine added by Editor Two on July 12, 2022
View all posts by Editor Two →