Damn-the-torpedoes — and the polls; It’s full-steam-ahead for the leftists running Team Biden.

According to ratings averages calculated by RealClearPolitics (RCP), Joe Biden’s approval currently sits at 42 percent, 10 points lower than that of his former boss, President Barack Obama, at the same point in 2009. 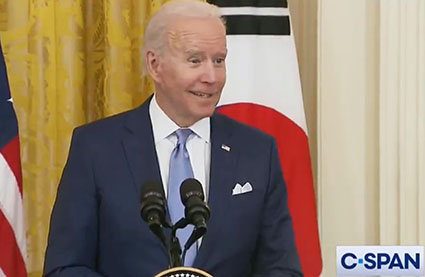 The averages calculated by RCP are pulled from a variety of polls including ones done by Fox News, Gallup, Reuters/Ipsos, Rasmussen and Monmouth.

A Quinnipiac University poll released last Wednesday showed only 38 percent of Americans approve of the job Biden and his handlers are doing.

“Battered on trust, doubted on leadership, and challenged on overall competency,” Biden “is being hammered on all sides as his approval rating continues its downward slide to a number not seen since the tough scrutiny of the Trump administration,” Quinnipiac polling analyst Tim Malloy said in a statement.

According to a Harvard CAPS/Harris Poll survey conducted in September, 51 percent of the 1,578 respondents said Donald Trump was a better president. Only 49 percent said they preferred Biden over Trump.

According to Washington’s top Democrat pollster, the nation’s mood is best described with words and phrases including “mass depression,” “frayed,” “pessimistic,” and “dejected.”

Celinda Lake, who has worked with the Clintons, the Democratic National Committee, and House Speaker Nancy Pelosi, said “Americans’ views on division in the country reflect a kind of mass depression at the ever-growing rifts that have come to define our new normal.”

The polls are finding that Americans see Team Biden’s policies as leading the nation near civil war, dividing families over politics, and leaving many fearful that the American dream is soon to be out of reach.

And, yet, Team Biden presses on with its progressive agenda.

“The most disturbing thing about the Biden Administration is the drop in approval ratings with no changes in policy,” Lauren Witzke, executive producer of the Stew Peters show and 2020 Delaware Senate candidate, noted in a Telegram post.

“Normally when a president is plummeting in the polls, the administration will make changes and adjustments to improve the numbers- But not the Biden Administration. They simply do not care and that is very concerning,” Witzke wrote.

“They have an agenda, and nothing will stop them from implementing it.”

Biden and team plummeting in the polls but don’t appear to care, Joe Biden, WorldTribune.com

Biden and team plummeting in the polls but don’t appear to care added by Editor Two on November 1, 2021
View all posts by Editor Two →