Bernie Sanders would stop deportation of all illegals in federal custody

If he were to win the presidency, socialist Democrat Bernie Sanders said he would put a stop to all deportations of illegal immigrants who are being detained by the U.S. government. 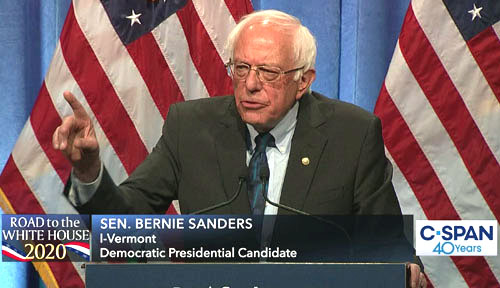 Sanders’ order to halt deportations would include for illegals convicted of murder, sex offenses, and drunk drivers.

“In any given year, more than 6,600 convicted murderers and sex offenders are arrested by ICE and placed into deportation proceedings. Under Sanders’ plan, those criminal illegal aliens would have their deportations halted, allowing them to remain in the United States for an extended period of time,” John Binder noted in a Nov. 8 report for Breitbart News.

Sanders’ plan would ensure that the most violent criminals, those with “Level 1” convictions, would not be deported. In December 2018, there were more than 6,100 “Level 1” convicted criminals in the custody of Immigration and Customs Enforcement (ICE).

“At the same time that ICE would be banned from deporting even the most violent convicted criminal illegal aliens under Sanders’ plan, new arrests by ICE agents would pile up and potentially cause a shortage of detention space for the agency,” Binder wrote.

Binder cited the case of 59-year-old Amir Abdelghani — a convicted terrorist — who was deported this year by ICE. Sanders’ plan would have stopped his deportation.

Another 2020 Democratic Party frontrunner, Sen. Elizabeth Warren, said she would decriminalize illegal immigration and hinted she may halt all deportations of illegals until Congress passes an amnesty for the 11 million to 22 million illegals living in the U.S.