Behind the Clinton media avalanche projecting certain victory: A desperate message to Moscow

Few U.S. Presidential election campaigns have been so heavily dominated by extreme, partisan propaganda — and so lacking in substance — as the campaign of 2016. The goal of the outgoing Administration and its designated successor, Hillary Clinton, has been to ensure complete opacity on past performance and future policies.

And when policy substance has been introduced by Republican candidate Donald Trump, it has been overshadowed by diversionary, superficial and unsubstantiated attacks given weight by an almost universally hostile media. 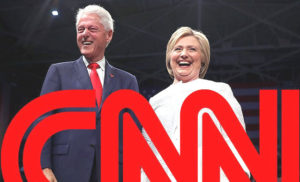 The question is whether the almost complete domination of the U.S. media by pro-Hillary Clinton coverage has served to blunt or change the significant anti-politician sentiment which had earlier swept “anti-Washington candidates” — Trump and socialist Bernie Sanders — into prominence. In essence, the voter “anti-Washington sentiment” was also anti-media, but there is now no way to accurately ascertain the true nature of the voters.

Polling data, often selectively acquired, was now being used by the overwhelmingly pro-Clinton media to give the impression that the earlier voter swell against Washington had evaporated. There is little which can be done to accurately determine whether this is true. Most foreign media or government analysts of the situation have no means to accurately gauge real U.S. voter sentiment.

However, it is possible that the media avalanche against Trump has dampened the Republican and Trump camps, which are not necessarily identical. That campaign, along with Trump’s lack of an understanding of how to play the political game, has helped split the Republican Party, and may have also damaged candidate Trump’s confidence and effectiveness in the final, critical phase of the campaign.

Thus, with a possible Clinton victory, the longer-term impact of the 2016 U.S. Presidential electoral process is possibly becoming more clear, as the campaign of Democratic Party candidate Hillary Clinton appears to take ascendancy (at least in the media) over the campaign of Republican Party candidate Donald Trump. The now-institutionalized, and covert, engagement of Mrs Clinton in supporting anti-Russian policies — since her period as Secretary of State — should be assumed to carry over into a Hillary Clinton presidency.

A Clinton victory in the November 2016 elections should not, however, yet be assumed to be automatic. There have been significant attempts by the Clinton team to portray their candidate’s ascendancy in a far more positive light than underlying trends may indicate. And there are more scandals to emerge from the hacking of the entire contents of Hillary Clinton’s private server.

Part of the determined and exaggerated Clinton campaign efforts to dominate the media with reports of her “massive lead” has clearly been designed to send a message to the Russian Government.

The Clinton team assumes the Russian Government had been responsible for the release of emails obtained from the penetrated private servers which Mrs. Clinton used illegally during her period as U.S. Secretary of State. Several batches of the emails from her servers have already been released, embarrassing the Clinton campaign. Clinton campaign sources indicate that they believed that these were the result of leaks by Russian intelligence services to Wikileaks.

The Clinton team is most anxious to avoid the leak of more such emails, many of which are known to be substantially more damaging to the Clinton campaign even than those released thus far. By posturing that a  Clinton election victory is “inevitable”, regardless of any further leaks, the campaign hopes to deter the Russian Government — if it was behind the leaks — from further revelations, on the basis that this would not help Republican candidate Donald Trump, and would only result in irreparable animosity between a possible President Hillary Clinton Administration and Russian President Vladimir Putin.

The strength of the campaign to dissuade Russia from further revelations, however, is evidence of just how unsure the Clinton team is of its lead in the campaign.

Even so, the Trump campaign does appear to have been blunted by more effective, and unrelenting, campaigning by Mrs Clinton, even though Mrs Clinton still refuses to risk exposure — reportedly for personal health reasons — to open press conferences. But the prospect of a Clinton election victory has reverberations in U.S. policies toward Europe and the European Union, the UK, Asia, and the Middle East, where a continuation of the Obama/Clinton policies of the past eight years would be assumed to continue. This would imply:

The Clinton campaign has attempted to cast doubt as to the possible strategic outcomes if Donald Trump won the Presidency. Indeed, that is a lesser-known outcome than a Clinton success, given that candidate Trump has campaigned on a commitment to breaking the status quo, or the patterns put in place by the Obama Administration and earlier administrations. However, candidate Trump has outlined several commitments. These include:

There is also the implication, based on his comments, that Trump would seek to ameliorate relations between the U.S. and Russia, and to adopt the intent of U.S. President Ronald Reagan to bring Russia and the former Soviet territories into alliance with the West. Trump’s approach to relations with the People’s Republic of China is less clear, but, equally, Mrs Clinton has also not indicated any new strategic approach to the PRC.

What emerges is either a continuation of the current trends in U.S. domestic governance and strategic posture globally under candidate Clinton, or a break with those trends — and the economic, social, and strategic stagnation — under candidate Trump, with all the uncertainty which accompanies change.

Perhaps it distills as a choice between the certainty of continued decline versus the uncertainty and potential for re-birth reflected by change.