‘Bad boys of Brexit’ join effort to split California in two: Coastal elites vs the people

Having spearheaded the campaign that led Britain to dump the European Union, the “Bad Boys of Brexit” are now pushing “Calexit” – a campaign to split California into two states.

“It would be portrayed as the Hollywood elites versus the people, breaking up the bad government,” Banks said of the new campaign. “Seventy-eight percent of people in California are unhappy with their government. It’s the world’s sixth largest economy and it’s very badly run.”

Banks said he and Farage wanted to show people in California “how to light a fire and win” the Calexit referendum.

If their campaign were successful, the eastern part of California would be more likely to vote Republican, giving the party two more senators and many more electoral college votes for a 2020 presidential election, Banks and Farage said.

The western side of the state, led by the “coastal elites” in Hollywood, Los Angeles and San Francisco, would likely continue to vote Democrat in elections.

Farage and Banks said their goal is to hold a referendum during the 2018 midterm elections, according to The Sunday Times.

Polling expert Gerry Gunster and Republican Scott Baugh, a former member of the state assembly, recruited Banks and Farage to the Calexit campaign.

Banks, Farage and their spokesman Andy Wigmore were in California two weeks ago to receive an award for their Brexit campaign from the American Association of Political Consultants. 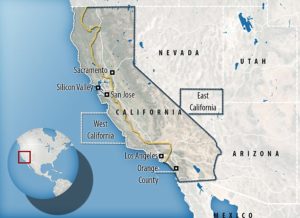 Wigmore said that those who raised money for the Calexit effort – agriculture tycoons and tech entrepreneurs – have felt “left out since [Former President Ronald] Reagan.”

“This has been done before with West Virginia and Virginia and North and South Dakota, so it can work,” Wigmore said.

Banks added: “We were saying that people said the same about Brexit – and we just went and did it. The money was pledged to take it to the next level. This could be the greatest political showdown ever.”

Another Calexit campaign emerging, called Yes California, would see the state seceding from the United States.

Voters would then need to decide in another referendum in 2019 whether California should become a separate country.

“In our view, the United States of America represents so many things that conflict with Californian values, and our continued statehood means California will continue subsidizing the other states to our own detriment, and to the detriment of our children,” the Yes California website states.