Many voters who left the GOP in the 2018 midterms are returning to the fold for 2020, a new poll published by The New York Times found. 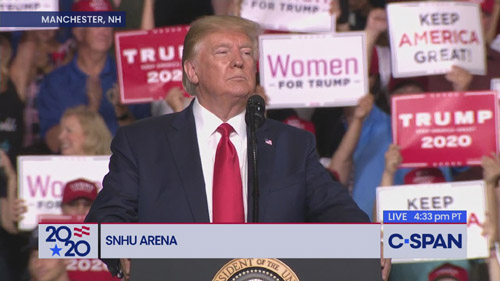 The New York Times Upshot/Siena College survey “found that many of those who left the GOP last year are returning to Trump because they feel good about the economy,” columnist Paul Bedard wrote for the Washington Examiner on Nov. 26.

In its report on the survey, the NY Times cited voters who said they support Trump’s re-election and who voted for Hillary Clinton in 2016.

“7 percent of those who supported Mrs. Clinton in 2016 said they now approved of the president’s performance — despite his personality and his Twitter account, many said,” according to the Times.

Bedard noted that the reasons many of those quoted in the article gave for choosing Trump over the eventual Democratic nominee “sound like a Trump campaign ad.”

Juli Anna California, a 57-year-old Florida nurse and Clinton supporter in 2016 told the Times that in 2020 she’s going for Trump. “[Trump’s] not exactly the person I’d have as my best friend. But he’s a great president. Most politicians just talk about doing things, but Trump does them.”

Matthew Headley, a Michigan general contractor and pizza business owner, echoed what the GOP has been saying about the House impeachment probe. “The harder [Democrats are] going after Trump, the more they’re just alienating people and pushing them away,” he said.

Michael Townsend, 38, a lifelong Democrat and construction worker in Dunmore, Pennsylvania, who voted for Trump in 2016 but then Democrats in 2018 said: “I’ve been in construction 21 years, and the last two years were the best years I’ve ever had.”

The anti-Trump NY Times, of course, had to add a qualifier to the poll, writing: “This group is only a sliver of the electorate — 2 percent of registered voters — and is not representative of all voters. They are overwhelmingly white, 60 percent are male, and two-thirds have no college degree.”

The Times did concede: “But the president’s strength among them helps explain why he is highly competitive in states that Democrats carried just one year ago.”