Posting “In God We Trust” signs and ensuring that cursive writing and the multiplication tables are being taught characterize a series of school reforms being proposed by the Republican-led North Carolina legislature.

One of the bills that advanced out of a key committee on June 5 would “require every public school in the state to prominently display signs containing the phrases ‘In God We Trust’ and ‘To Be, Rather Than To Seem,’ ” according to a report by the Raleigh News & Observer. 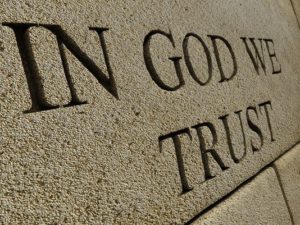 “To Be, Rather Than To Seem” is the English translation North Carolina’s state motto, which is Esse Quam Videri.

The News & Observer noted that a second bill would check to make sure that schools are still teaching cursive writing and the multiplication tables, even though they are not part of the new Common Core curriculum the state adopted several years ago. It would also automatically send elementary school students with high test scores into advanced math classes.

A third bill “would expand the controversial Innovative School District program, in which the control of low-performing schools is taken away from local school boards and handed over to charter school operators,” the report said. The bill would also allow school districts to hire the spouses of their superintendents.

The North Carolina ACLU told The News & Observer that signs mentioning God in schools would make non-Christian students feel “that they are second-class or not welcome.”

Republican state Rep. Bert Jones, the main sponsor of the bill requiring the signs, said that “When you see the words ‘In God We Trust,’ certainly no one is compelling you to worship a god … or to practice any particular religion. To some people that could be a cow. To some people that might be a tree.”

Republican state Rep. Kevin Corbin noted that “At the end of the day it’s our national motto.”

The second bill would require schools to report they are still teaching cursive writing and the multiplication tables, which are not required under new Common Core standards, the News & Observer report said.

“If you can’t write it, you can’t read it,” said Republican state Rep. Pat Hurley, who sponsored a previous bill to save cursive and the multiplication tables.

The third bill that advanced on June 5 “would expand the Innovative School District program, allowing even more low-performing traditional schools to be turned over to charter school operators,” the News & Observer report said. “The program’s currently capped at five schools but this bill would remove that cap.”

The bill would also change state anti-nepotism laws to allow school boards to hire the spouses of their superintendents, which proponents said would held smaller school districts where the school board sometimes appoints a new superintendent who’s already married to a teacher, the report said.

Meanwhile, some North Carolina lawmakers are saying Republican leaders have all but shut down debate on arming teachers, the News & Observer said in a separate report.

“Seeking to avoid controversy in an election year, our leadership has chosen not to allow this bill even to be heard in committee,” said state Rep. Larry Pittman, one the sponsors o a bill to allow teachers to carry guns at school. “This is a failure to act that I fear may one day cost lives that could have been saved.”

Pittman’s proposal “would allow teachers with concealed weapons permits and 16 hours of active shooter training to take handguns to school if their local school boards allow it. The bill was sent to the Rules Committee, where many proposals are left to languish,” the News & Observer said.

Gun-related proposals by Democrats “have also been buried in committee,” the report said. “That includes a ‘red flag’ bill that would allow family members or law enforcement officers who have first-hand knowledge of someone behaving in a threatening manner in possession of or with access to a firearm to petition a district court judge for a gun violence restraining order.”

Pittman said he wasn’t giving up on the bill. “If we fail even to consider this option, and children, teachers and school staff die who might have been saved if we had allowed school personnel to be armed, I do not want to be at fault for that.”

Paul Valone, head of the gun rights group Grass Roots North Carolina who helped write the bill, said 14 states allow teachers to carry firearms to protect students, the report said. He warned that unless the state passes “some type of deterrent” it would likely face a tragedy similar to the shooting in Parkland, Florida.