Author: The ‘quiet conquest’ of Europe is well underway 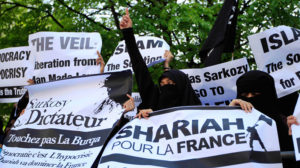 Calvar spoke of an estimated 15,000 Salafists among France’s seven million Muslims, “whose radical-fundamentalist creed dominates many of the predominantly Muslim housing projects at the edges of cities such as Paris, Nice or Lyon. Their preachers call for a civil war, with all Muslims tasked to wipe out the miscreants down the street.”

But Meotti focused on another threat, even more dangerous that has been characterized by the magazine Valeurs Actuelles as “the quiet conquest”.

It is “moderate” Islam’s “sinuous project of producing submission. And its goal? “Changing French society. Slowly but surely”.

“That threat is personified in the main character of Michel Houellebecq’s novel, Submission: Mohammed Ben Abbes, the ‘moderate’ Muslim who becomes France’s president and converts the state to Islam. And from where does President Ben Abbes start his Islamization? The Sorbonne University. It is already happening: Qatar recently made a significant donation to this famous university, to sponsor the education of migrants.”

In France, the quiet conquest has the face of the Union of the Islamic Organizations of France (UOIF), which a Simon Wiesenthal Center report charged with “anti-Semitism, advocacy and financing of terrorism and call to Jihad… ”

Not only does UOIF not encourage the integration of Moslems in France,” the report states, “it actually provides a nursery for the most radical Islamist positions.”

In the United Kingdom, “mainstream Muslim organizations are dispensing ‘Islamic justice’ through more than 85 sharia courts attached to mosques. Divorce, polygamy, adultery and wife-beating are only some of these courts’ matters of jurisprudence,” Meotti writes.

“The end is more important than the means. The Islamic State has the same goal as most of the members of so-called ‘moderate Islam’: domination under the sharia. Many supposedly ‘moderate Muslims’, even if they do not commit violent acts themselves, support them quietly. They support them by not speaking out against them. If they do speak out against them, they usually do so in coded terms, such as that they are “against terrorism,” or that what concerns them about violent acts by Muslims is the possibility of a “backlash” against them.”