Former President Barack Obama has proclaimed that his administration “didn’t have a scandal that embarrassed us.” 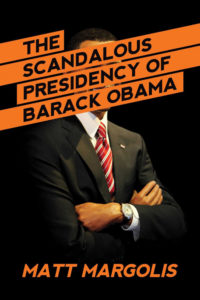 A new book details 29 Obama scandals the author believes the 44th president probably should be embarrassed about.

Matt Margolis, author of “The Scandalous Presidency of Barack Obama”, said that “There are many serious scandals, and therefore it’s hard to say which is the biggest scandal, but I believe Obama’s spying on the Trump campaign, which is starting to be fully unraveled now, will likely prove to be one of the biggest.”

The author also takes the media to task for essentially ignoring the Obama administration’s many scandals.

“Obama’s supporters in the media, academia, and the grassroots of the Democratic Party are invested in the idea that his presidency was an unparalleled success, and that he was the archetype of presidential ethics. Nothing could be further from the truth, as the following pages prove, but if they repeat their lies often enough, perhaps others will believe them,” wrote Margolis.

Margolis added that “The same people who treat Michael Wolff’s Fire and Fury as gospel despite it being discredited garbage are the same people who continue to dismiss Obama’s real scandals as much ado about nothing. If Donald Trump abuses his authority while in office he should be held accountable, but how can we have an honest conversation about corruption in government if we don’t hold our leaders to the same standards regardless of party?”